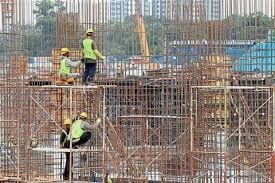 KUALA LUMPUR: The anticipation of a recovery in the construction sector for the second half of this year has been dragged down by phase one of the National Recovery Plan (NRP) as well as the delay in the rollout of new mega contracts including the Mass Rapid Transit 3 (MRT 3).

Following the issuance of a stop work order on all construction works in Selangor and Kuala Lumpur last week, contractors are expected to face immediate earnings risks from the negative impact on progress billings.

Last week, the ministry issued a stop work order on construction works during the phase one of the NRP with only critical maintenance and repair works allowed to proceed. It is important to note that most ongoing major civil works contracts are concentrated in Selangor and Kuala Lumpur including MRT2, Light Rail Transit 3 (LRT3), West Coast Expressway (WCE) and and Damansara- Shah Alam Elevated Highway (DASH).

CGS-CIMB Research estimated that the impact on revenue and earnings per share (EPS) would be “greater” for contractors with property ventures, real estate investment trusts (REITs) and toll highway concessions.

“We see a milder negative impact on contractors’ earnings from the current two-week work suspension.

“We make no changes to our EPS forecasts and target prices for now. At this juncture, we believe sector sentiment will remain cautious in view of the political uncertainties and earnings risks from the movement control order, ” it said.

Previously, the research house’s earlier rough estimate of the impact of the one-month stop work under the first and second phases of MCO last year estimated a potential 14% to 22% cut in EPS for contractors under coverage.

As such, CGS-CIMB Research is keeping a “neutral” stance on the construction sector due to earlier expectations of a recovery theme which has been weighed down by the recent MCOs.

From its earlier checks with contractors, CGS-CIMB Research also noted that site productivity levels also slowed down significantly since the MCO took place on June 1.

“Moreover, site productivity levels were disrupted by supply chain constraints as building material manufacturing facilities were kept idle under the phase one of NRP ruling (depleting inventories), ” it said.

It imposed a 60% work force capacity on the construction works that were allowed to proceed.

Moving forward, CGS-CIMB expects sector-wide share price performance to remain weak in the medium term due to the MCO-led overhangs and the ongoing national recovery programme.

“We would keep tabs on sector laggards with perceived stronger recovery angles in the fourth quarter of calendar year 2021 forecast, ” it said. Year-to-date, the share prices of contractors under its coverage have fallen by 10% on average, with the big caps led by Gamuda Bhd

Meanwhile, CGS-CIMB Research said Gamuda Bhd remains the biggest laggard and the potential reactivation of the MRT 3 is the main share price catalyst.

For the small cap space, HSS Engineers Bhd’s share price is attractive following the revival in engineering consultancy-related contracts. CGS-CIMB Research said the upside risk of construction sector is the election-driven contract rollout after the lifting of political emergency, while the downside risk is the prolonged shutdown and further delays in job rollout.