MyWinet Daily News at Your Fingertips
Home English News Street animals are taken care of, too 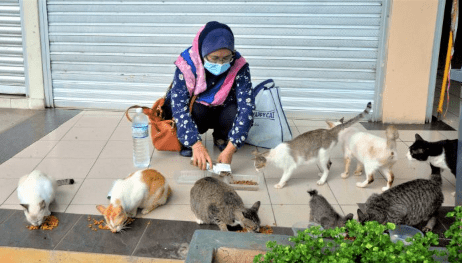 KUCHING: Sarawak Street Cat Club (SSCC) has launched its charity project to raise funds to ensure that street animals, cats in particular, do not starve during the movement control order (MCO).

SSCC deputy chairman Noor Baizura Mamat said the club had been actively raising funds to buy cat food to be distributed to selected individuals since March 26.

“The charity project has been around for a long time but only focused on the targeted areas.

“Since MCO has been implemented, many eateries have been closed so we are expanding the concept of the charity project to the city of Kuching, Samarahan and Serian,” she said when asked by reporters while feeding a street cat at Kubah Ria here yesterday.

Noor Baizura added that the club has set up several stations catering to street food such as behind the coffee shops and markets.

“Given that movement is implemented now, the club is seeking help from cat lovers in other areas to provide these street animals with food. The club will help them buy food through the charity project.

“So far, the club has received RM1,250 in donation from the public to buy cat food that will be distributed to several stations.

“In fact, we have also received a sponsorship of cat food from Happy Cat and we hope that many other cat food companies will also provide assistance,” she said.

“We will buy cat food online, after which the selected individual will pick up cat food supplies from the store to give to street cats at the station.

“In Serian, because the stores selling cat food there aren’t many, the club will channel funds so that individuals selected there can buy their own cat food. All purchases must have receipts,” she said.