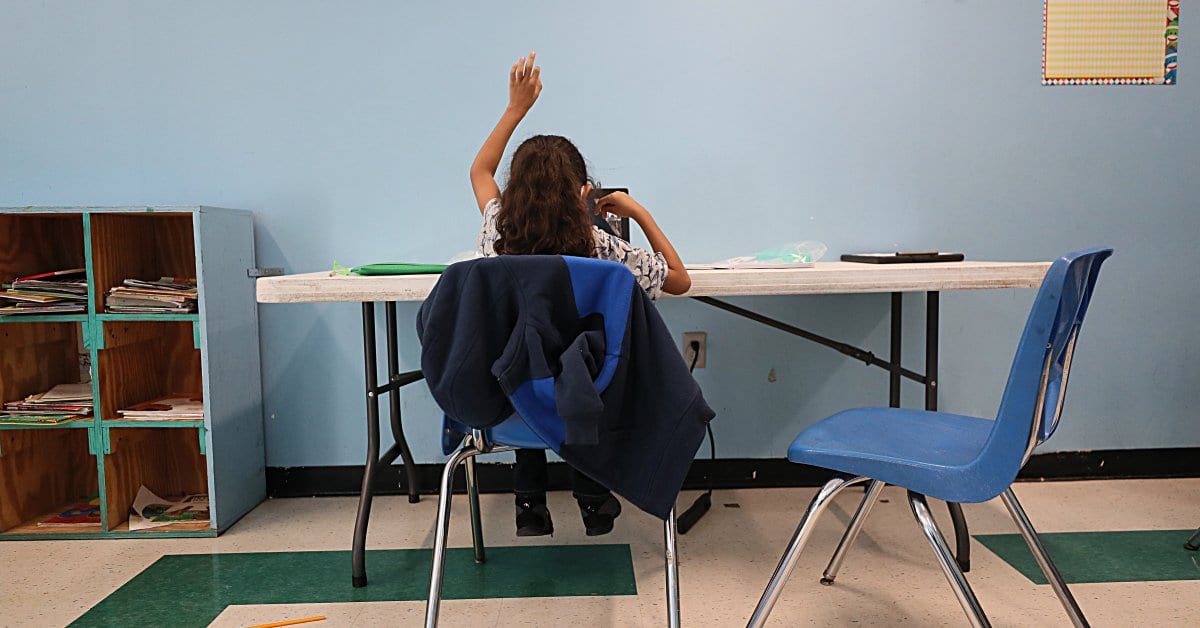 Students in the U.S. are likely to have suffered up to nine months of learning loss in math, on average, by the end of the academic year because of disruptions caused by the pandemic, and students of color could be as many as 12 months behind, according to a report published Tuesday — the latest analysis of the toll this unprecedented school year has taken on children.

The study released by McKinsey & Company comes as school districts struggle to find a way to educate students while coronavirus cases surge around the country. And as experts have warned all along, it shows that the pandemic has widened existing racial and socioeconomic disparities in education.

“While all students are suffering, those who came into the pandemic with the fewest academic opportunities are on track to exit with the greatest learning loss,” said the report, which was released nine months after U.S. schools initially shut down to slow the spread of the virus. Black and Hispanic students are more likely than white students to be learning remotely, and they are twice as likely as white students to have received no live contact with teachers over the previous week, it found.

“The pandemic has forced the most vulnerable students into the least desirable learning situations with inadequate tools and support systems to navigate them,” the McKinsey report stated. “In the spring, that was perhaps an inevitable consequence of being thrust into a sudden unpredictable crisis. With the knowledge and systems we now have in place, allowing this to continue is unacceptable.”

Data released by individual school districts and other recent studies have added to this bleak picture. In Fairfax County Public Schools, the largest district in Virginia, the percentage of children receiving at least two failing grades rose by 83% this semester, the Washington Post reported. And Montgomery County Public Schools, the largest district in Maryland, saw failing grades in English and math jump as much as sixfold among the most vulnerable students.

A report by the nonprofit NWEA, formerly known as the Northwest Evaluation Association, found that students’ reading growth was similar to non-pandemic years, but lower in math. Researchers also warned that the most disadvantaged students were likely missing from this data, if their schools didn’t offer the assessments or if individual students couldn’t access them, which would mean the report underestimated learning loss and achievement gaps.

Similarly, the McKinsey findings are based on the results of the Curriculum Associates i-Ready Assessment, which was offered in schools across 25 states from the start of the school year until Oct. 15. But because those assessments were offered in person, McKinsey’s researchers said their estimates of learning loss are likely conservative.

For months, the consensus that most students are better served academically and socially by in-person learning has run up against concerns that reopening schools would lead to further transmission of the virus, putting teachers and other school employees, in particular, at risk.

In recent months, some parents have demanded a return to in-person instruction. Others have argued that while remote learning might be necessary, districts have failed to provide their children with a quality remote education. In a complaint filed on Nov. 30, seven Black and Latino families sued the state of California over educational inequities, arguing that the shift to remote learning in March “left many already-underserved students functionally unable to attend school.” “The State continues to refuse to step up and meet its constitutional obligation to ensure basic educational equality or indeed any education at all,” the suit says. 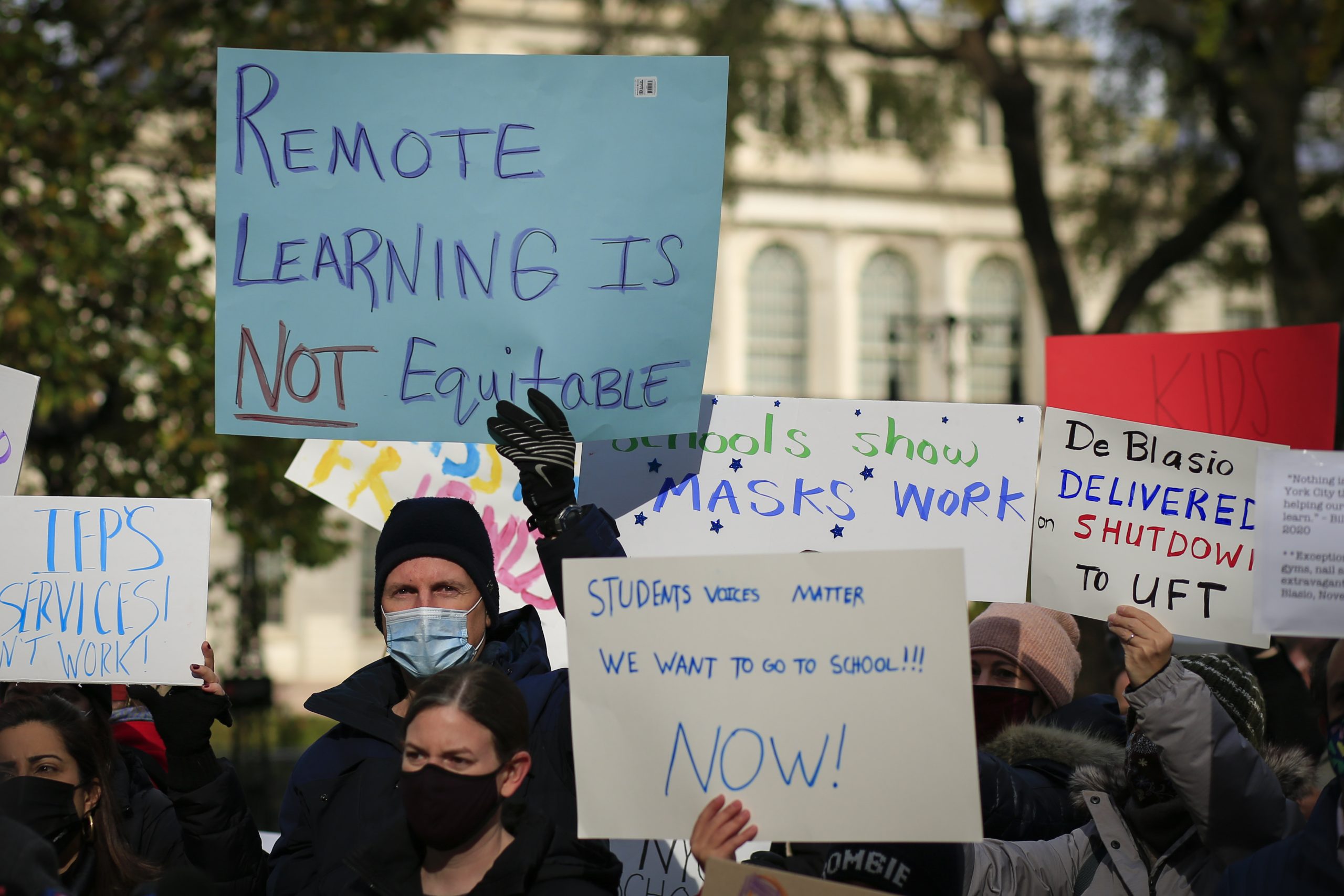 Parents demand a reopening of schools in New York City on Nov. 19 at a protest outside City Hall. The city began allowing some in-person learning to resume on Dec. 7.

Dr. Anthony Fauci, director of the National Institute of Allergy and Infectious Diseases, has said that getting children back into schools should be a priority, though it depends on getting the virus under control. “Close the bars and keep the schools open,” Fauci said in an ABC News interview on Nov. 29, acknowledging that there isn’t a one-size-fits-all solution for every school district. “The default position should be to try as best as possible, within reason, to keep the children in school or to get them back to school,” he said. “The best way to ensure the safety of the children in school is to get the community-level of spread low.”

And President-Elect Joe Biden recently said he has spoken with teachers’ union leaders about a plan to reopen more schools. “We can safely open those elementary schools,” he told CNN in an interview last week. “We can make it safe for teachers if we invest in what needs to be done, number one, sanitizing the schools, number two, making sure that they have ventilation, number three, making sure there are smaller pods of children, meaning you need more teachers. You’ve got to pay for this stuff.”

The McKinsey report recommends that schools invest in strategies to help the most vulnerable students catch up, such as week-long “acceleration academies” that provide targeted instruction to small groups of students and one-on-one daily tutoring, estimating that such initiatives would cost $42 to $66 billion to reach half the country’s schoolchildren.

“These tangible learning losses have already occurred, but there are evidence-based approaches that we can use, and we need to start thinking now about how we’re going to deploy those,” Emma Dorn, one of the report’s authors, said during a press call on Monday. “There’s really an imperative now to direct more resources to students who need it most.”

Motorsport: Motor racing-Retiring Raikkonen says wife will be more emotional than him

Interactive: Burden of unpaid work wearing women down, at home and in workplaces