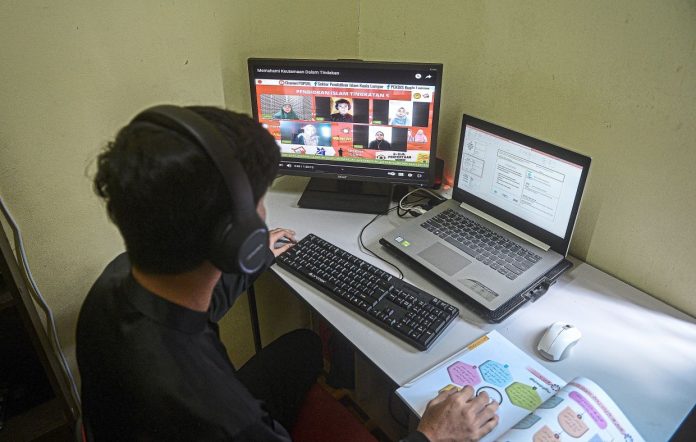 KUALA LUMPUR (Bernama): The teaching and learning sessions for students who are sitting for major examinations in the five states that are transitioning into Phase Two of the National Recovery Plan (NRP) starting on Monday (July 5) will continue to be conducted via the home-based teaching and learning (PdPR) approach until the mid-term break.

The Ministry of Education (MOE) in a statement on Sunday (July 4) said the announcement on school reopening for the next term slated for July 25 would be made at least a week before.

“Based on the standard operating procedures (SOP) set by the National Security Council (NSC) for Phase Two NRP, face-to-face learning sessions are allowed for students sitting for examinations only.

“However, the MOE School Calendar for 2021 will remain as announced by Senior Education Minister Datuk Dr Mohd Radzi Jidin at a press conference on June 6,” read the statement.

During the press conference, Radzi said the PdPR would be implemented for 25 school days starting June 13 and 14 according to the respective groups until the mid-term break.

He said this decision was made based on the threshold values achieved by these states.

The three indicators for transition into the second phase are the national daily average Covid-19 cases must drop below 4,000, the utilisation of beds in the intensive care unit (ICU) should be at a moderate level and at least 10 per cent of the population should be fully vaccinated.- Bernama

Soccer: Soccer-Freiburg undergo second defeat in a row in opposition to Frankfurt

Football: Soccer-UEFA say it has contingency plan for Euro 2020 final