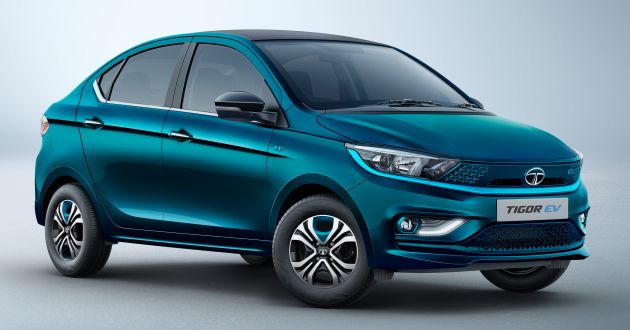 Tata Motors has launched the facelifted Tigor EV in India, a few weeks after the model was first revealed in mid-August this year. Essentially a fully electric version of its already-refreshed sedan that competes in the sub-four-metre segment, the Tigor EV is the company’s second electric vehicle available to private buyers and joins the Nexon EV SUV in the local line-up.

The low starting price makes the Tigor EV the most affordable EV available to private buyers in India currently, as it even undercuts the Nexon EV that ranges from INR 1.399-1.685 million (RM79,659-95,944).

Highlights of the new Tigor EV include Tata’s Ziptron powertrain that features an electric architecture operating at 300+ volts, which is miles ahead of the previous iteration of the model released in 2019 that was equipped with a 72-volt system. 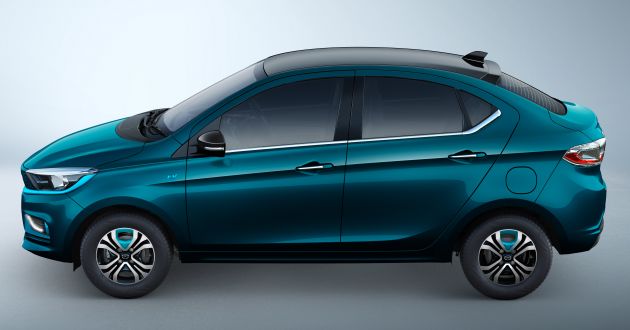 Powering the e-motor (that also provides regenerative braking) is a liquid-cooled lithium-ion battery pack with an energy capacity of 26 kWh, which is good for an range of 306 km, certified by the Automotive Research Association of India (ARAI). This is, again, an improvement over the 21.5-kWh battery used previously that offered just 213 km of range.

It should be noted that the previous (and lesser) 72-volt system is still used for the commercial version of the Tigor EV called the Xpres-T, which was launched earlier in July. Additionally, the Tigor EV’s powertrain isn’t as capable as the Nexon EV, which offers higher outputs (129 PS and 245 Nm) and slightly more range at 312 km.

For charging, the Tigor EV abandons the previous Bharat EV Charger (BEVC) standard used for both AC and DC fast charging in favour of more conventional connectors. For AC charging, the new model uses the Type 2 standard, and with a 15 A plug point, it’ll take eight hours and 45 minutes to get from a 0-80% state of charge (SoC).

Tata didn’t provide detailed information about the Tigor EV’s AC charging capabilities, but if we extrapolate based on India’s single-phase voltage standard of 230 volts paired with a 15 A point, the vehicle’s onboard charger should theoretically be able to handle up to 3.45 kW of power.

Tata says that it has tested the Ziptron powertrain over 35 million km of real-world driving conditions across India’s diverse and challenging landscape, adding that the battery pack and e-motor have an IP67 rating. To further back up the reliability claims, customers will also get an eight-year, 160,000 km warranty on both components.

Compared to the regular internal combustion engine Tigor, the EV model has a closed-off front grille, while the lower intake has smaller apertures – both have a Mercedes-Benz-like mesh pattern on them. The interior is also largely the same, with notable changes being a circular dial for the gear selector and the inclusion of a digital instrument cluster with blue EV accents. For entertainment, the base XE has none, but the XM comes with a 3.5-inch system by Harman and four speakers. Stepping up to the top XZ+ nets you a larger seven-inch touchscreen along with four additional tweeters, Android Auto and Apple CarPlay support, steering-mounted controls and a reverse camera instead of just sensors.

Safety-wise, the vehicle gets two airbags (front passengers), ABS, EBD and electronic stability control, all of which contribute to a four-star safety rating from Global NCAP (GNCAP). The Tigor EV is the first EV ever tested by GNCAP, and it certainly impressed Alejandro Furas, secretary general of Global NCAP, who said, “Tata has shown consistent safety improvements throughout its fleet range.”

“The Tigor demonstrates that improvements are also possible with EV models, which can pose a technical challenge because of the electric powertrain system. Tata should be recognised and applauded for this commitment to improving their vehicles in response to Global NCAP’s call to democratise vehicle safety,” he added.

So, what do you think of this pint-sized EV that is affordable, provides a commendable amount of range, and is deemed safe by an external assessor? Share your thoughts in the comments below.