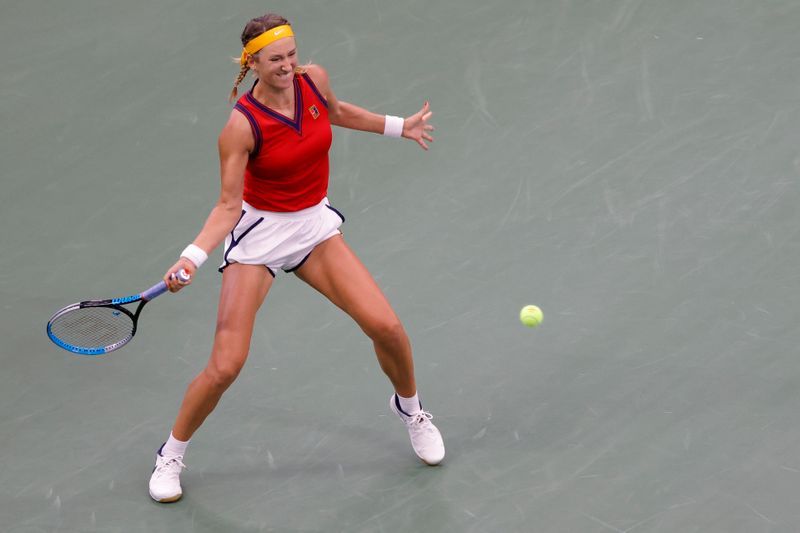 NEW YORK (Reuters) – Victoria Azarenka moved into the U.S. Open third round with a 6-3 7-6 (1) win over Italy’s Jasmine Paolini on Wednesday, saying she was happy to be back playing in front of crowds at Flushing Meadows, especially vaccinated fans.

Azarenka made it to the final last year before losing to Naomi Osaka but did it in empty stadiums as COVID-19 restrictions barred spectators from the Billie Jean King National Tennis Center.

This year the fans are back but only those who have proof of vaccination and the 18th-seeded Belarusian admitted confusion over why the rules do not extend to players as well.

“It was great to be back playing in front of fans and mostly vaccinated,” said the twice Australian Open champion, who pulled out of a WTA Tour event in April because it coincided with her scheduled COVID-19 vaccination.

“To me that’s a bit bizarre that fans have to be vaccinated and players are not.

“So I think that in my opinion, it’s inevitable that it will be mandated at some point, like other leagues are doing.

The United States Tennis Association (USTA) then elected to extend the vaccine requirement to all attendees aged 12 or older entering the sprawling facility.

Both the WTA and ATP has urged players to get vaccinated but some have expressed reservations and declared the decision a freedom of choice.

World number three Stefanos Tsitsipas said he would only get the COVID-19 vaccine if it became mandatory to compete in tennis, drawing a sharp rebuke from the Greek government.

World number one Novak Djokovic, who is bidding to complete the calendar-year Grand Slam at the U.S. Open, said in April he hoped the COVID-19 vaccine would not become mandatory for players and has declined to answer questions regarding his own vaccination status.

“I respect everybody’s opinion as long as it’s not conspiracy theory,” said Azarenka, a three-times U.S. Open runner-up. “If you actually have decent knowledge and looked into research and have your facts and stats and research, that’s a different conversation.

“I hope that as an association we make the best decision for our business, for our health, for the tournaments, for public.”

Other Sports: Half of UK fans betting on French victory in Euro 2020, says...