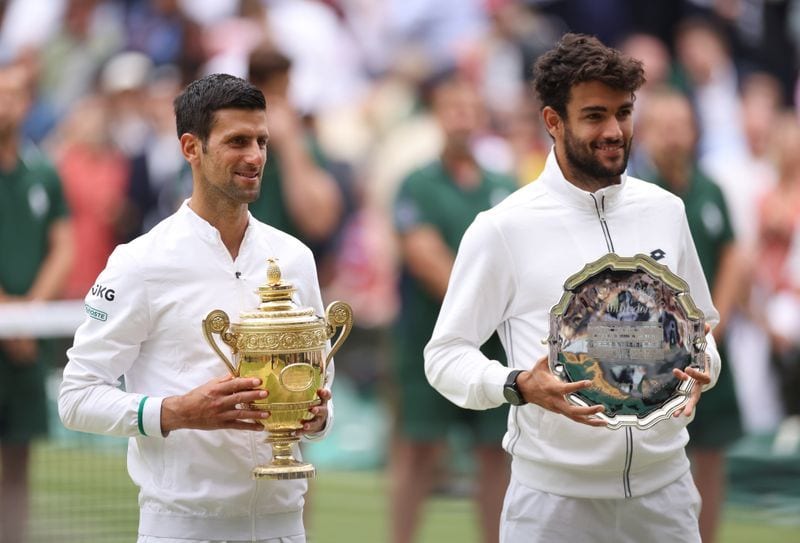 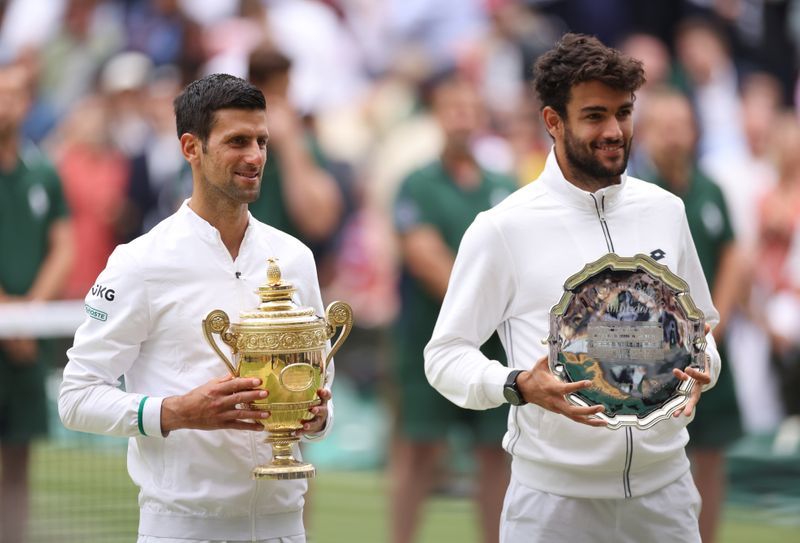 LONDON (Reuters) – Novak Djokovic had the weight of tennis history on his shoulders and an Italian with dynamite on his racket strings to contend with but emerged victorious to earn a sixth Wimbledon and a record-levelling 20th Grand Slam title on Sunday.

Matteo Berrettini, playing inspired tennis in his first Grand Slam final, unleashed everything in his formidable arsenal to rock Djokovic in a riveting contest.

But it was not enough to stop the indefatigable Serb, who found his best when required, to pull through 6-7(4) 6-4 6-4 6-3 on what looks like being a momentous day in the raging argument about who will go down as the greatest of all time.

For the first time in his career Djokovic shares the lead for the most Grand Slam singles titles with Roger Federer and Rafa Nadal and looks primed to leave both in his wake.

In a year that is brewing into something extraordinary, the world number one has won the first three majors and will become the first man since Rod Laver in 1969 to complete the calendar-year Grand Slam if he wins the U.S. Open in September.

Not only that but with the Olympics looming, the one title to elude Djokovic, he is within sight of the fabled Golden Slam — something no man has achieved.

The celebrations on a frenzied Centre Court, that at times sounded more like Wembley Stadium, were unconstrained after Berrettini chipped a backhand into the net to end the final.

Djokovic fell to his back before standing arms aloft, soaking in the acclaim of 15,000 fans who, while edging towards underdog Berrettini throughout the match, realised they were watching a special player making history.

After chewing on a blade of grass, Djokovic threw his arms out to all four sides of stadium as the crowd roared ‘Nole’ before he climbed up into the stands to embrace his coaching team and even stopped for a selfie with a young fan.

“That was more than a battle. He has a true hammer, an Italian hammer and I felt that on my skin today,” Djokovic said.

When he won his second Grand Slam title in 2011, three years after his first, Federer owned 16 and Nadal nine.

Yet he has reeled them in relentlessly and his thirst for silverware is unquenched.

“I have to pay a tribute to Rafa and Roger, they are legends of the sport and they are the two most important players I ever faced in my career and the reason I am where I am today,” Djokovic said on court.

“Something shifted in 2011. The last 10 years have been an incredible journey and it’s not stopping here.”

Actor Tom Cruise was amongst the crowd on Centre Court to watch seventh seed Berrettini’s attempt to accomplish what many believe to be Mission Impossible — taking three sets off Djokovic in a Grand Slam match.

Yet in the first part of seismic sporting Sunday for his nation, with Italy facing England down the road at Wembley in the Euro 2020 final, he played like a gladiator in Rome’s Colosseum.

No Italian, man or woman, had ever won a Wimbledon singles title and Berrettini was bidding to become the first Italian man to win a major since Adriano Panatta triumphed at Roland Garros in 1976.

When he slipped 5-2 down in the opening set against a man playing his 30th Grand Slam final and seventh at Wimbledon, it looked as though the day might pass him by.

But after surviving an exhausting 11-minute service, in which he saved a set point, the 25-year-old began to ratchet up the power, booming down serves and forehands to finally put some dents in the Djokovic armour.

Djokovic failed to serve out the set at 5-3 as Berrettini chased a dropshot to break. After earning himself a tiebreak, it was Berrettini who was the aggressor and he moved a set ahead after firing down a 138 mph ace.

The effort of snatching a 71-minute first set took its toll on Berrettini and Djokovic stormed 4-0 ahead in the second before withstanding another fightback to level the match.

Djokovic struck the early blow at 1-1 in the third set as a net-skimming backhand from out wide forced a volley error from the Italian.

Nothing was straightforward though for Djokovic and Berrettini threatened to break straight back when he thundered a forehand winner past the Serb in the next game to reach deuce before Djokovic steadied to take a 3-1 lead.

When Djokovic survived another tough service game to move 4-2, ahead he cupped his hand to his ear — and the crowd responded with soccer-style chanting that shook the rafters.

Even after Djokovic had taken the third set Berrettini still looked dangerous but when the Italian double-faulted on break point in the seventh game of the fourth, his hopes were over.

No new positive cases recorded in Sarawak today, total at 549