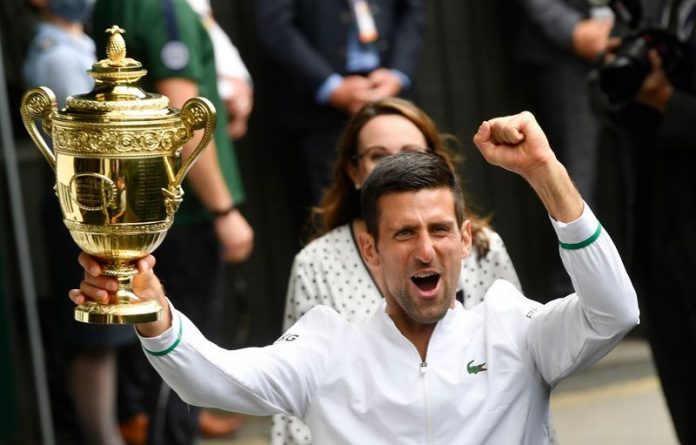 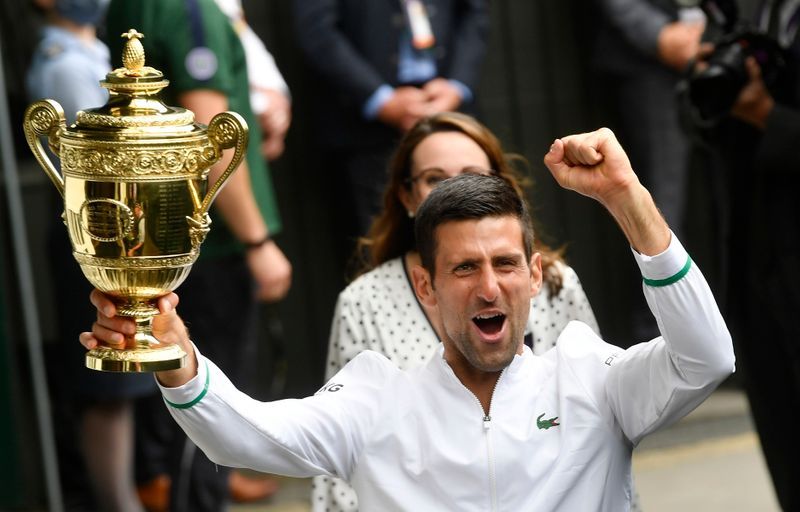 The following is a timeline charting how Djokovic caught up with Federer and Nadal.

2003: Federer became the newest entrant into the Grand Slam club with the first of his eight Wimbledon titles, beating Mark Philippoussis in the final.

2004: The Swiss flexed his muscles by winning three majors – the Australian Open, Wimbledon and the U.S. Open – losing in the third round of the French Open.

2005: Federer defended his Wimbledon crown and U.S. Open crowns while Nadal burst on to the scene with his first French Open title beating Mariano Puerta in the final.

2006: Federer enjoyed another trophy-laden year winning three majors while Nadal laid the foundation for a period of dominance on clay with his second French Open title.

2007: The seemingly unstoppable Federer repeated his feat from the previous year but the French Open title continued to elude him as Nadal thwarted him in the final for a second straight year.

2008: Djokovic hit big time with his maiden major, beating Jo-Wilfried Tsonga in the Australian Open final. After his French Open triumph, Nadal stunned Federer in the Wimbledon final but the Swiss responded by winning the U.S. Open.

2009: Nadal won his first hardcourt Grand Slam title, edging out Federer in five sets in Australian Open final. However, Nadal’s 31-game winning streak at Roland Garros came to an end in the fourth round, allowing Federer to claim his only claycourt major trophy.

Nadal was unable to defend his Wimbledon title as he was forced to pull out with knee problems.

The Swiss went on to claim his record 15th major at Wimbledon, surpassing Pete Sampras’ tally. He finished the season as the year-end number one for the fifth time in his career.

2010: Federer started the year by winning the Australian Open for a fourth time.

But it turned out to be Nadal’s finest campaign as he swept the next three majors. He defeated Djokovic in the U.S. Open final to complete a career Grand Slam.

2011: Djokovic began his ascent to the top by winning 10 tournaments in 2011, including three majors at the Australian Open, Wimbledon and the U.S. Open.

For the first time since 2002, Federer went away empty handed from all four slams.

Nadal continued his dominant run at Roland Garros to add another major title to his tally, while Federer won a record-extending 17th major at Wimbledon.

2013: Djokovic won his third straight Australian Open by defeating Andy Murray in the final. While Federer struggled with a back injury, Nadal finished the year as number one after defending his French Open crown and adding another U.S. Open title to his tally.

2015: Djokovic won three majors – Australian Open, Wimbledon and U.S. Open. The Serb also became only the second man to defeat Nadal at the French Open when he beat the Spaniard in the quarter-finals. Djokovic reached all four major finals during the season but was beaten by Stan Wawrinka in the Roland Garros showpiece.

2016: Djokovic successfully defended his Australian Open crown before winning his maiden French Open title, making him the holder of all four majors — a feat the media dubbed the “Nole Slam”.

Federer and Nadal were both plagued by injuries during the season. Since making his Grand Slam debut in 1999, Federer was a no show at a major for the first time when he missed the French and U.S. Opens due to injury.

2017: Federer won his 18th slam — and his first since Wimbledon 2012 — with a thrilling five-set victory over Rafa Nadal in the Australian Open final.

Nadal cemented his place as the greatest claycourter in history when he secured a record 10th title in Roland Garros.

Records continued to tumble as Federer became the first man to win Wimbledon eight times with victory over Marin Cilic in the final, before Nadal clinched his second U.S. Open title.

Djokovic, who retired midway through his Wimbledon quarter-final against Tomas Berdych, missed the latter half of the season with an elbow injury.

2018: Federer won his sixth Australian Open to become only the fourth player after Margaret Court, Serena Williams and Steffi Graf to win 20 or more major singles titles. Nadal extended his winning run at Roland Garros, before Djokovic earned his first major in more than two years at Wimbledon.

A third triumph in New York ensured Djokovic had equalled Sampras’ tally of 14 majors and was now only behind Federer and Nadal in the all-time list.

2019: Djokovic won a third successive major and a record seventh Australian Open with a dominant straight sets win over Nadal. Djokovic also won a fifth Wimbledon title after saving two match points in a five-set win over Federer in the final that lasted four hours and 57 minutes — the longest in Wimbledon history.

Nadal maintained his stranglehold on the French Open, before holding off Daniil Medvedev in the U.S. Open final to move within one of Federer’s Grand Slam haul.

2020: Djokovic was back to his best at the Australian Open as he lifted his eighth title at Melbourne Park.

While the Wimbledon was cancelled due to the COVID-19 pandemic, Nadal inflicted one of the most humiliating defeats on Djokovic, thrashing him 6-0 6-2 7-5 to lift a men’s record-equalling 20th major title.

Federer (knee injury) and Nadal (due to the pandemic) opted to skip the U.S. Open. However, Djokovic missed an opportunity to close the gap on his rivals after he was disqualified from his fourth-round match at Flushing Meadows for accidentally hitting a ball at a line judge.

2021: Djokovic continued his dominance at the Australian Open to win a record-extending ninth title. After overcoming Nadal in the French Open semi-final, Djokovic fought back from two sets down to defeat Greece’s Stefanos Tsitsipas and win his 19th major in Paris.

Victory over Italian Matteo Berrettini in the Wimbledon final on Sunday ensured he moved level on 20 titles with Nadal and Federer.

(Compiled by Shrivathsa Sridhar and Hardik Vyas in Bengaluru, editing by Pritha Sarkar)

Boxing: Boxing-Heavyweight champion Usyk has ‘no fear’ at joining defence of Kyiv