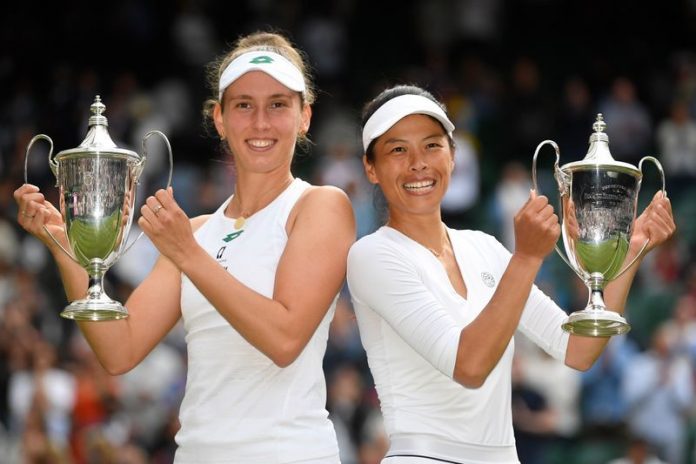 LONDON (Reuters) – Taiwan’s Hsieh Su-wei claimed her third Wimbledon doubles title with a third different partner as she and Elise Mertens hung on to claim victory in a marathon final against Russian duo Veronika Kudermetova and Elena Vesnina on Saturday.

The Taiwanese-Belgian duo saved match points on the way to claiming a 3-6 7-5 9-7 win on Centre Court.

It was the second successive Wimbledon doubles crown for Hsieh who joined forces with recently-retired Barbora Strycova to win the title in 2019.

She also won the title in 2013 with Peng Shuai.

This time it was Mertens, the newly-installed No.1 ranked women’s doubles player, who she teamed up with to great effect.

Unseeded Kudermetova and Vesnina had two match points at 5-4 in the second set, the second one producing an incredible rally that Hsieh eventually won with a volley.

As the third set went on and on, the 35-year-old Hsieh then finished off a gripping contest with a backhand winner.

“That felt like seven hours,” Mertens said of the two-and-a-half hour battle on a packed Centre Court.

“There were nerves but we managed it well in the end. “We are very happy that we could close it out.”

Ukraine war: WHO says attacks on hospitals are increasing daily