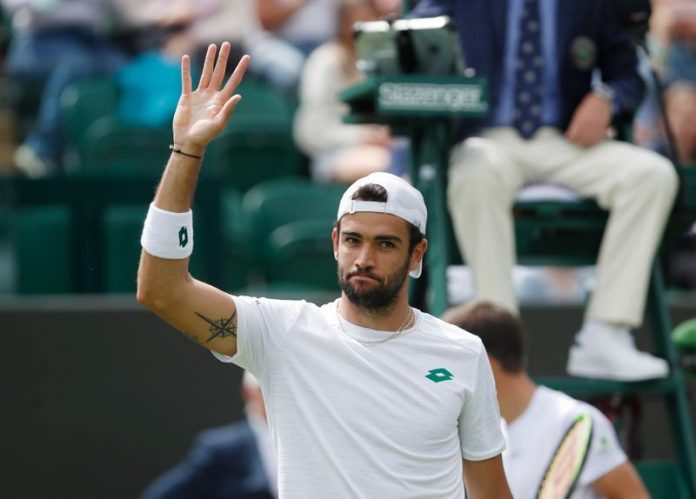 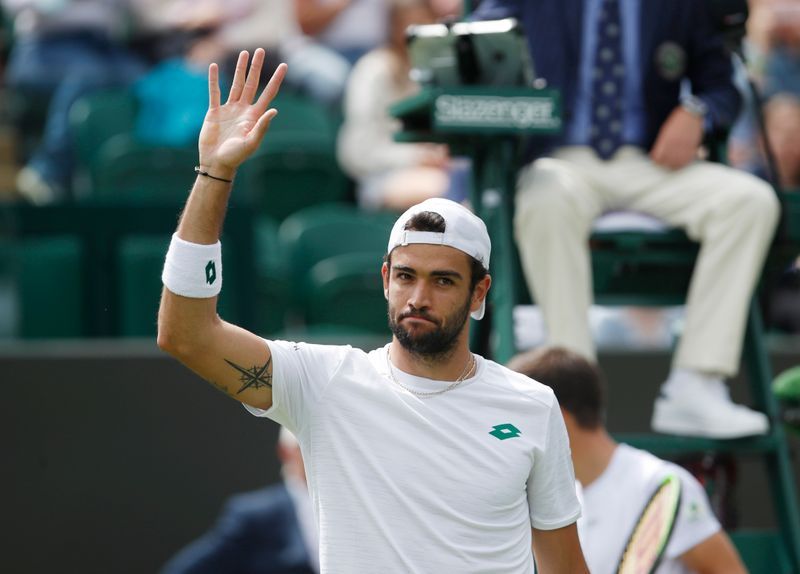 LONDON (Reuters) – Italian seventh seed Matteo Berrettini strengthened his status as a genuine Wimbledon title contender by cruising into the fourth round on Saturday with a convincing 6-4 6-4 6-4 win over Aljaz Bedene of Slovenia.

The 25-year-old Italian put his booming serve and crunching forehand to good use against the 64th-ranked Bedene whom he defeated in four sets on his way to the second week of the grasscourt Grand Slam in 2019.

There was more joy for Italians on Saturday as 23rd seed Lorenzo Sonego defeated Australian James Duckworth 6-3 6-4 6-4, making it just the third time that two Italian men have advanced to the fourth round of the grasscourt major.

Nicola Pietrangeli and Giuseppe Merlo achieved the feat last time, in 1955, six years after Giovanni Cucelli and Rolando del Bello reached the round of 16 at Wimbledon.

Berrettini, considered a dark horse for the men’s singles crown trophy at the All England Club in the absence of Rafa Nadal and Dominic Thiem and the early loss of Greek Stefanos Tsitsipas, came to Wimbledon after winning the Queen’s title.

He matched his best result at Wimbledon with the win against 31-year-old Bedene, who was bidding to become the first Slovenian man to reach the fourth round of a Grand Slam.

Berrettini broke Bedene’s serve once in each of the three sets while staying solid on his own delivery, facing just two breakpoints in his first service game in the second set.

The match on Court Three was delayed by 90 minutes because of rain but the wait had no impact on the Italian, who hit 19 aces and totalled 37 winners while keeping a cap on his unforced errors.

He will next meet Belarusian Ilya Ivashka, who also had a easy passage into the round of 16 with an identical 6-4 6-4 6-4 victory over Jordan Thompson of Australia.

(Reporting by Sudipto Ganguly in Mumbai; editing by Clare Fallon)