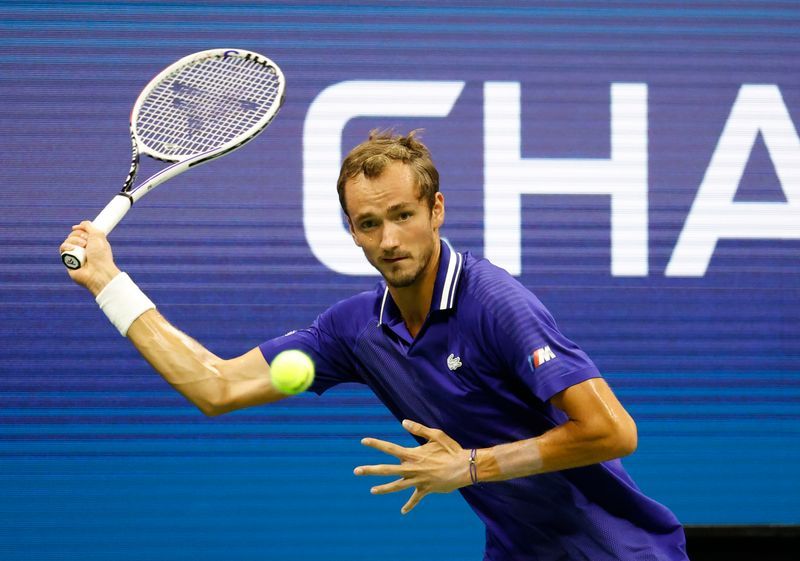 NEW YORK (Reuters) – Russian second seed Daniil Medvedev stayed solid from the baseline against Frenchman Richard Gasquet to advance to the second round of the U.S. Open with a 6-4 6-3 6-1 victory on Monday.

It was the 200th career win for the 25-year-old and his 160th on hard courts and the Russian showed why he is one of the top contenders for the title with a clinical display at Arthur Ashe Stadium in the final match of the opening day.

The 2019 U.S. Open finalist, who also reached the title match of the Australian Open at the start of the year, broke Gasquet once in each of the first two sets before the veteran Frenchman seemed to start struggling physically.

Gasquet, 10 years older than his opponent, started to move gingerly in the third set in the hot and humid conditions at Flushing Meadows as Medvedev broke him three times to close out the match in under two hours.

“I saw a lot of matches today, I had all the day to watch and all the matches were tough physically,” Medvedev said in his on-court interview.

“Talking about our match the score might seem easy but we played two hours and first two sets were high intensity. Third set I was actually not that good physically also.

“I’m happy that I didn’t stay out here for five hours and I can be ready for the next match.”

An off-balance pick-up lob from Medvedev in the 10th game of the first set brought the crowd to their feet before the Russian produced another immaculate lob against an advancing Gasquet to win the opening set with his first break.

Gasquet advanced to the net regularly against Medvedev, who has won 11 of his 12 singles titles on hard courts, but the Russian had the weapons to dominate from behind the baseline.

Medvedev won six games in a row in the third set and converted his third matchpoint with a forehand winner to set up a second round meeting against Germany’s Dominik Koepfer.

LinkedIn signs up to EU code against online hate speech