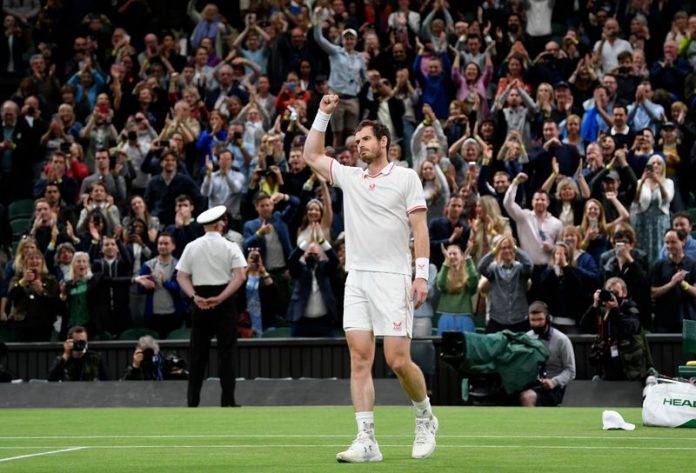 LONDON (Reuters) – Andy Murray appeared down and out on Wednesday but he was back doing what he likes best at Wimbledon, picking himself up and dusting himself down as he roared to a 6-3 4-6 4-6 6-4 6-2 second-round win over little-known German qualifier Oscar Otte.

Before Wednesday, Murray had never lost a Grand Slam match to a player ranked as low as number 151 Otte and he had never been beaten before the third round at the All England Club.

When the match had to be briefly halted at 2-2 in the fourth set as gathering gloom meant the roof had to be closed so that the contest could continue under floodlights, it seemed as if Murray was on the verge of losing both of those personal milestones on day three of the championships.

But that stoppage allowed 118th-ranked Murray, playing on a wildcard this year as he works his way back to full fitness following hip-resurfacing surgery, to gather his thoughts and change his tactics as he won 10 of the next 14 games to book a third-round meeting with Canadian 10th seed Denis Shapovalov.

Child falls to death from 10th floor of police quarters

EV1: How an electric car dream was crushed

Terengganu DOE collected over 20 tons of e-waste throughout 2021

8 Resources to Use to Ensure You’re Using Inclusive Language