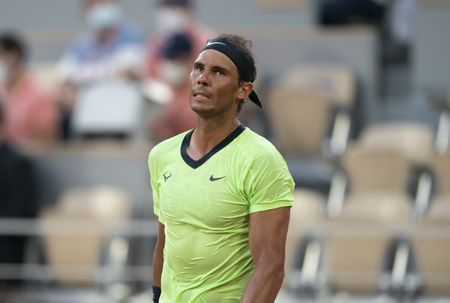 PARIS (Reuters) – Rafael Nadal was his usual gracious self despite suffering his first defeat at Roland Garros since 2015 as he went out to world number one Novak Djokovic in the the French Open semi-finals on Friday, saying his opponent had deserved his victory.

It was only 13-time champion Nadal’s third defeat here since his debut in 2005 and the first time in 115 best-of-five-set matches on clay that he had lost after taking the opening set.

With the temperature dropping as the sun started to set, Nadal’s usually devastating top spin was less effective and top seed Djokovic started an unlikely comeback after losing the first five games to win 3-6 6-3 7-6(4) 6-2.

“It is true that probably the conditions were a little bit slower later on. We had been playing (in) very warm (weather) and high bounces,” Nadal told a news conference.

“During the night the situation goes a little bit the other way, no? So (the ball) bounces a little bit less. The ball gets less top spin. That’s more favourable to him, the conditions.

“But it doesn’t matter. That’s tennis. The player who gets used to the conditions better is the player who deserves to win. So no doubt he deserved to win,” added the Spaniard.

Third seed Nadal also admitted it was not his day despite a super fast start, which somehow left Djokovic unfazed.

“Sometimes you win, sometimes you lose. I tried to give my best. Probably it was not my best day out there. Even if I fought, that I put a lot of effort (in), I mean, the position on the shots hasn’t been that effective tonight,” he said.

“Against a player like him who takes the ball early, you’re not able to take him out of his positions. Then it is very difficult.

“Even like this, I had the big chance with set point, 6-5, second serve. That’s it. Anything could happen in that moment.

“These kind of mistakes can happen. But if you want to win, you can’t make these mistakes. So that’s it.

“Well done for him. It has been a good fight out there. I tried my best and today was not my day.”

Velesto on course to return to profitability

New app identifying jaundice from babies’ eyes ‘could save lives’