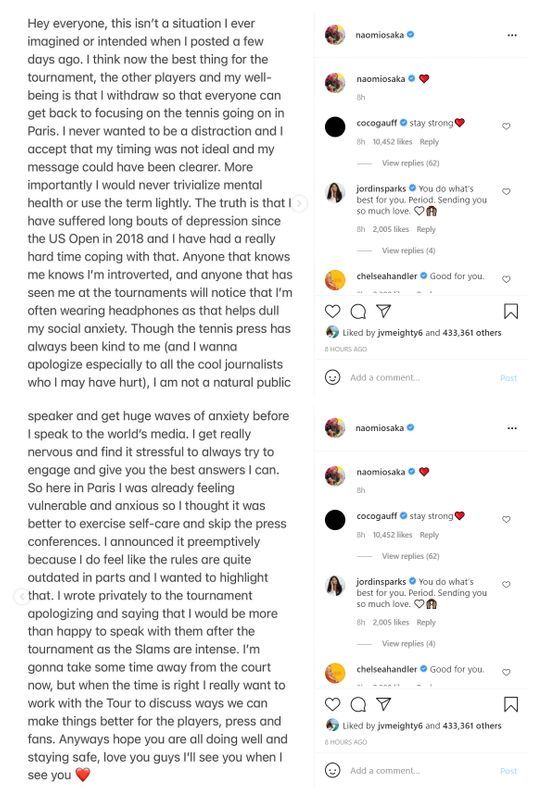 PARIS (Reuters) – Naomi Osaka should be supported and applauded for her decision to withdraw from the French Open to focus on her mental health, former U.S. Open champion and WTA Players’ Council member Sloane Stephens said on Tuesday.

Japan’s Osaka left the claycourt Grand Slam on Monday after refusing to attend the mandatory post-match press conferences and revealing she had been suffering from bouts of depression for three years.

“Having to take a step back and say, ‘Hey, I need to do this for me’, we should support her and applaud her, because a lot of people wouldn’t do that,” Stephens said after her first round victory.

“A lot of people play through being miserable and being upset and not being able to speak out and say those things.”

Stephens, the 2017 U.S. Open champion who was elected to the Players Council in August 2019, said she hopes the four-time major winner will come back stronger after her time away from the tour.

“We should be more accepting and allow her to take the time she needs to work on herself and better herself so she can be in a better position to play tennis and be happy and enjoy her tennis,” she said.

“But I think there definitely needs to be more open dialogue on what not only her but everyone on tour goes through. I think we don’t talk about it enough,” she said, adding that she hopes Osaka’s decision will inspire others to speak out when they are struggling with their mental health.

“Feelings are real and we’re all human, so I hope she takes the time she needs. I hope she feels better and I hope she gets back to winning.”

Coco Gauff, who shared an emotional on-court interview with Osaka after falling to her at the 2019 U.S. Open, echoed Stephens’ comments.

“Obviously I have some great moments with her on court and off court,” Gauff said after her first round victory.

“I hope that she can beat that and come out better and stronger.”