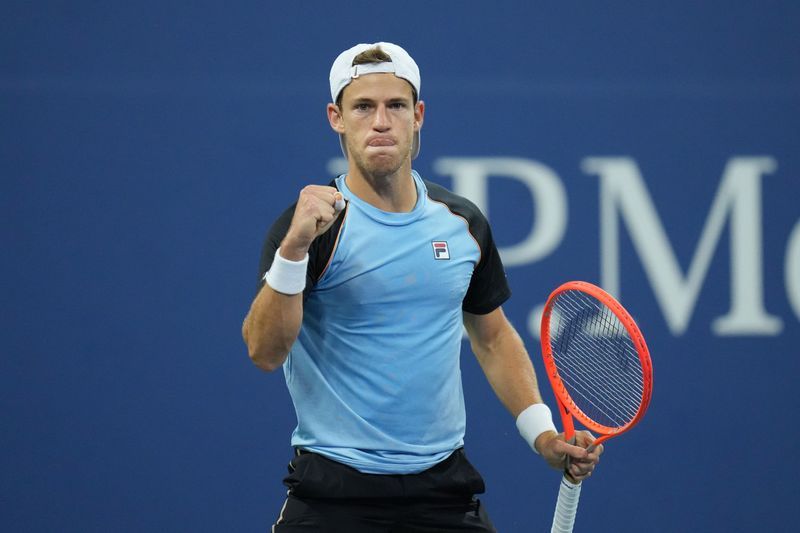 NEW YORK (Reuters) – Argentine Diego Schwartzman overcame big-serving Kevin Anderson of South Africa and multiple weather interruptions to move into the U.S. Open third round with a 7-6(4) 6-3 6-4 win on Wednesday.

Play was halted at Louis Armstrong Stadium in the opening set for over 30 minutes as the venue’s retractable roof was unable to prevent rain from being blown in sideways by strong winds resulting from Tropical Storm Ida.

Schwartzman then slipped during the tiebreak in the opening set, forcing another halt in play as the court was wiped down with towels.

Officials restarted the match but it was suspended shortly after and organisers later announced it would resume at Arthur Ashe Stadium following the end of the contest between Stefanos Tsitsipas and Adrian Mannarino.

When the match got back underway around midnight the Argentine quickly hit his stride and with a single break of serve in each of the second and third sets closed out the contest at around 1 a.m.

“Thank you everyone for staying tonight. Crazy weather,” Schwartzman said after setting up a third round clash against Slovakian qualifier Alex Molcan.

“We were talking too many times, not just because we wanted to play (but) also because the security, the government and the police, everyone was involved in the decision to come to this (Arthur Ashe) court.

“I think every opportunity I had when we changed the court I took it. So I’m very happy.”

The 35-year-old Anderson, the 2017 finalist at Flushing Meadows, came into the match winning two of his previous three meetings against the 11th seeded Schwartzman.

Serve was always going to be the main weapon for the former world number five, who smashed 49 aces in Monday’s opening win over Czech Jiri Vesely. He tallied another 24 against Schwartzman but was undone by unforced errors (58), tallying 37 more than his opponent.