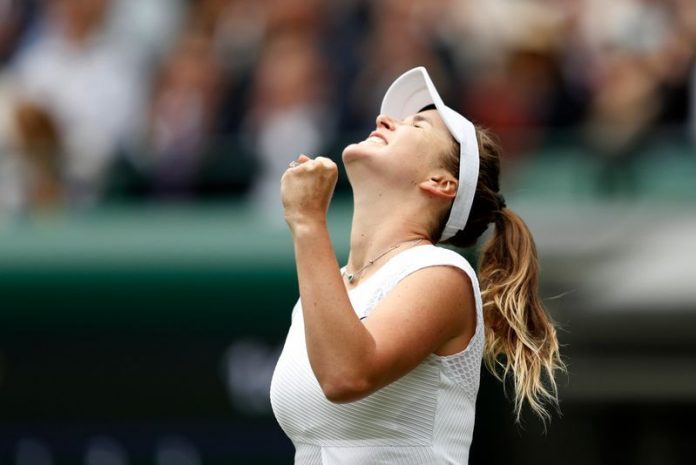 LONDON (Reuters) – World number five Elina Svitolina was made to work hard in her Wimbledon opener on Wednesday as the Ukrainian sealed a 6-3 2-6 6-3 victory over unseeded Belgian Alison Van Uytvanck.

The pair traded breaks at the start of their second career meeting before Svitolina gained the upper hand following a tight game to go up 4-2, and the third seed held off a late fightback to claim the first set.

The aggressive Van Uytvanck mixed up her shots, with rifled drives and delicate drops, and took every chance to approach the net to break Svitolina for a 3-1 lead in the second set before levelling the contest at one set apiece.

Both players wobbled on serve before 2019 semi-finalist Svitolina, who won the pair’s last clash in three sets at Indian Wells six years ago, rediscovered her rhythm in the decider on Court One to close out the victory.

In the second round, the 26-year-old faces Poland’s Magda Linette who rallied from a set down to defeat unseeded American teenager Amanda Anisimova 2-6 6-3 6-1.

(Reporting by Shrivathsa Sridhar in Bengaluru; Editing by Christian Radnedge)

Cycling: Cycling-Almeida out of Giro d’Italia after testing positive for COVID