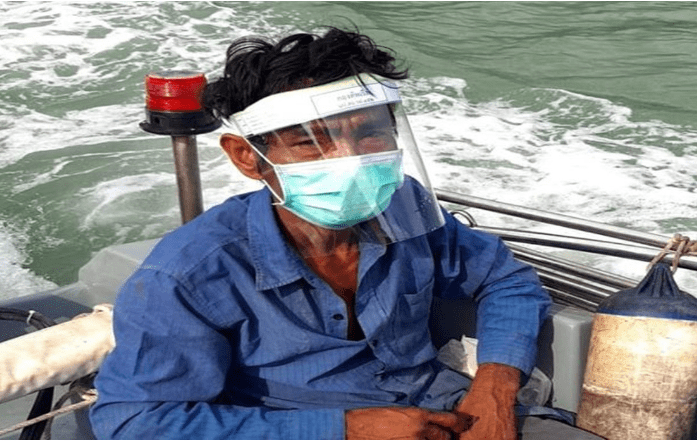 BANGKOK: A Thai fisherman stranded in Malaysia for days following the closure of border checkpoints braved himself to swim home.

However, the 45-year-old fisherman from Piman, Muang district in Satun, Southern Thailand was found exhausted and drifting at sea close to the shore of Puyu sub-district in Satun yesterday.

He was then rescued by Marine police.

The man has been stranded at the Thai-Malaysian border in Perlis for days following the closure of border checkpoints since March 23.

Missing his family members and unsure when the border checkpoints will reopen, the man decided to walk to the nearest border point and cross-over.

Satun Marine Police Inspector Pol Lt Col Banjerd Manavej said the man walked for two days and reached a narrow canal of about 100 metres wide and he decided to swim across.

However, strong currents washed him further to the sea, he said.

“Fisherman in the village found him swimming and alerted the police around 2.30 pm (local time) yesterday.

“He was exhausted when we found him. However, he was very happy to see us.

“He was brought to hospital for a medical checkup. He is in good condition and he will undergo 14-day quarantine at the state quarantine facility in Satun,” he told Bernama when contacted here today.

Banjerd said the man told the police he only had a bottle of water and one lunch box during his ‘journey’ home.

The man was charged for illegal entry and fined 800 baht.

Meanwhile, Banjerd said Marine Police were stepping up patrols in Thai-Malaysian waters to prevent Thai nationals who are stranded in Malaysia to sneak in following the closure of border checkpoints between the two countries.

Beginning March 23, the Thai government has closed nine checkpoints along its borders with Malaysia until further notice to curb the spread of COVID-19.

However, the Thai Interior Ministry has announced that its citizens who are still stranded at the Malaysian border will be allowed to return if they meet the required conditions starting April 18. – Bernama