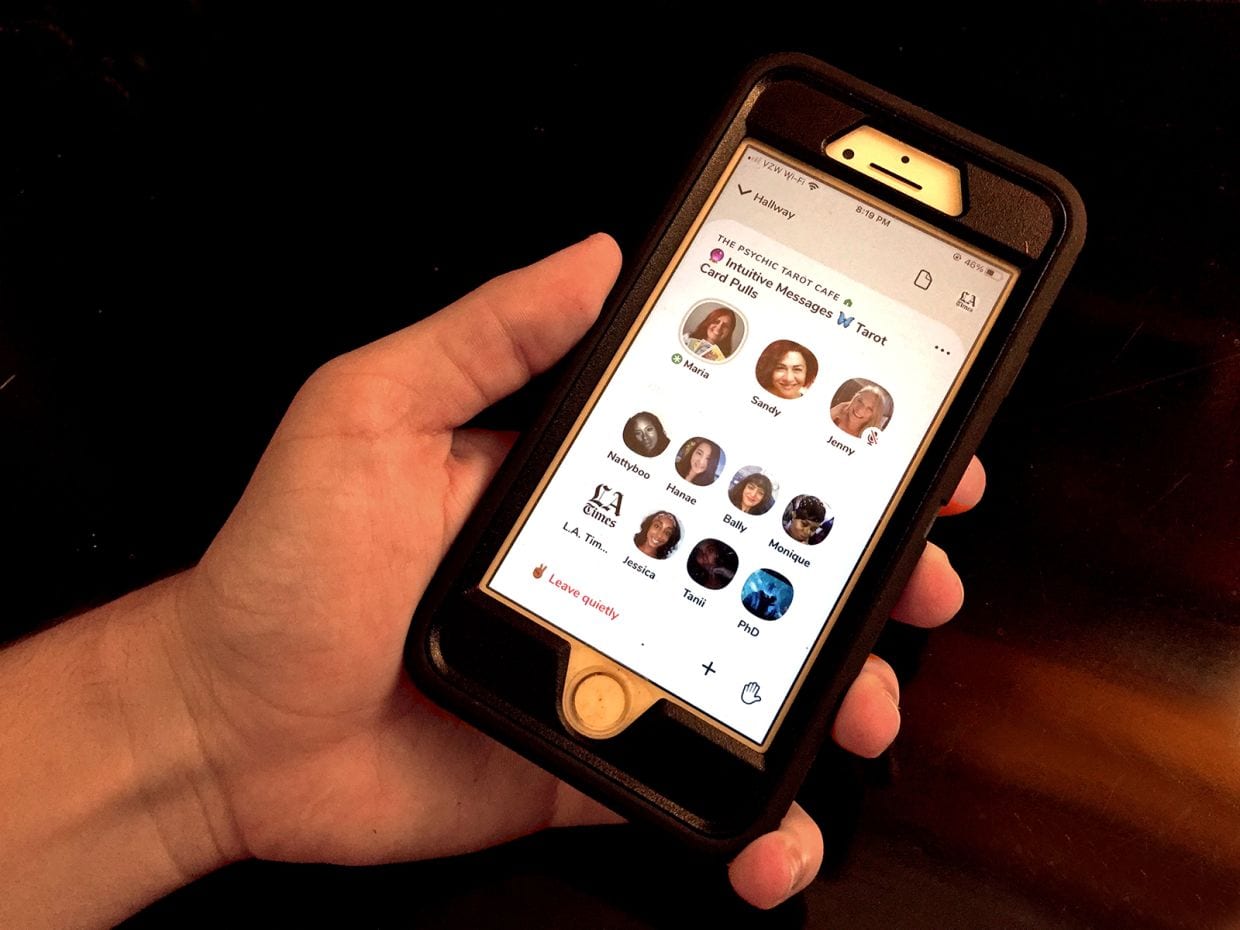 “What I’m seeing here with you is this hitting a wall (and) needing to push through, needing to step up,” Macintyre says as she looks over the three tarot cards she’s drawn from her deck: the Page of Fire, Ace of Air and Emperor.

“There’s also this information coming in here with these cards about exciting opportunities; so I again want to talk to you about being brave and volunteering for them.”

Macintyre is a spirit worker – a clairvoyant medium, to be exact – and does her tarot readings out of a modern, cosy home office. Behind her rests a shelf of tasteful crystal orbs; a whimsical spiral staircase snakes its way through one corner of the room, bathed in a warm purple glow.

“It’s about opening up your energy, ” she continues, making a gesture like an inflating balloon. “If we want to receive anything in the universe, we have to be open. We have to create a space in our energy to receive it.”

Macintyre is based in the United Kingdom; I’m in Washington, DC, five time zones and over 3,000 miles away. It’d be a long way to travel in person, but distance is no obstacle for spiritual energies — or transoceanic Internet cables.

Like a lot of the mediums she knows, Macintyre did the bulk of her consultations in-person before Covid-19 lockdowns swept the world in 2020. But now, with limited ability to host clients in her home, she’s expanded her Facebook following twenty-seven-fold; taken a class on how to use Instagram more effectively; ramped up her use of Zoom; and even briefly experimented with TikTok, much to her kids’ bemusement.

“I went, ‘Oh, just give it a go; I’ll try and do a bit more online work, because I have time,’” she said in an interview.

That’s also how she wound up pulling tarot cards on Cameo, an app where people buy and sell short, personalised video messages. The platform is mostly known as a place for C-list celebrities to send their fans celebratory shoutouts — for US$200 (RM831), a tertiary actor from The Office will congratulate your child on their Sweet Sixteen – but for Macintyre it’s become another way to get paid for her talent. (Cameo does take a 25% cut of booking fees for itself.)

“Ninety-eight percent of my business is now online, when before it was the other way around,” Macintyre said.

In some sense, spiritual work has always been remote work. After all, what is speaking with the dead if not a Zoom call between Earth and the spirit world?

But moving these storied traditions online also has the potential to sap them of their mystique. The Internet can’t yet replicate the smell of burning incense or the aura of a candlelit shrine; what weight does a message from the other side hold when it shows up in your newsfeed between a dance tutorial and a low-resolution meme?

For the spiritualists who’ve moved online during the pandemic – and plan on staying there even after home visits become safe again – that lost atmosphere is made up for, at least in part, by the Internet’s convenience and reach.

Not every spiritualist worker needed the pandemic to get online; plenty of witches, spirit coaches and the like were using social media to find audiences well before that was their only option. But times are tough – a database put together by the nonprofit newsroom ProPublica shows that some psychics and tarot readers have even received Paycheck Protection Program loans – and the pandemic has forced many spirit workers to rethink what their work looks like in the 21st century.

It helps that the Internet is in the midst of a broad shift toward making everything, and everyone, monetisable. The ad-funded business model that’s long subsidised web surfing is ceding ground to a less centralised economy which aims to replace middleman publishers with direct-to-consumer transactions. Platforms like Substack, Patreon and OnlyFans now offer an alternative to the big, free distributors of (respectively) news, art and pornography; Cameo is a product of this trend, too.

Maria Gonçalves, a psychic medium based out of Canada, turned to another app – Clubhouse – in an effort to keep doing tarot readings while socially distanced. Clubhouse offers real-time, audio-only group conversations where anyone can host a live discussion “room” based around a specific theme; strangers can listen in or, by raising their digital “hand, ” speak directly with the hosts.

The free app is full of wannabe thought leaders and cryptocurrency evangelists, but for Gonçalves it’s been the perfect way to meet new people interested in spiritualism and, using tarot, answer questions about their futures.

“All you need is a phone,” said Gonçalves, who will hop onto the platform and pull a few cards when she has a free hour. “People will jump on and they’ll be like, ‘Oh, I was here last week,’ or they will have had a reading, a card-pull, and then will come back a week or two later and let us know what happened.”

The tarot cards, dense with symbolism and meaning, give structure to Gonçalves’ guidance, and facilitate intimate conversations that turn the Clubhouse room into something between a psychiatrist’s couch and an oracle’s cave.

During one nighttime session, Gonçalves drew the Seven of Swords for a visitor looking to make a career change. The card suggested an abundance of “fakeness” in the visitor’s life, Gonçalves warned, such that if she wanted to succeed, she’d have to learn to ignore the people dragging her down.

Another visitor, similarly worried about work, was met with the King of Cups – a card which Gonçalves said, in its connotations of “relationships and mastering relationships, ” suggested the importance of networking.

And for a young woman questioning whether to pursue her dreams of becoming a digital nomad? The Nine of Cups said: go for it.

“This is your yes,” Gonçalves explained – though she’s quick to append her predictions with the caveat that we all still have free will.

“Something’s coming, and it’s coming soon, ” one of the hosts, a medium and energy healer who works under the name Katie with Spirit, told a guest who was curious about where their career was headed. “I was shown you sitting at, like, a bar, and having a conversation, meeting a friend or meeting someone, and then they know somebody, or they know something that’s going on, or a position that would be great for you, or a connection.”

Speaking with The Times later, Katie explained that even though she does these Clubhouse rooms for free, they’re still an important part of her business.

“You can be someone who’s never had a psychic reading, and hop into a room and listen to me giving a reading to a total stranger, and it kind of demystifies the idea of what to expect and what a psychic reading really is, ” she said. “Someone, let’s say in London or in India or in Michigan, who would have never known who I was might go to my Instagram and then go to the website and book a reading one-on-one.”

And getting people to her website is how Katie actually generates income: US$60 (RM249) for a “psychic checkup” offering insights about life, love and work; US$80 (RM332) for “distance reiki, ” a remote version of the controversial energy healing practice; or US$120 (RM499) for an hourlong Akashic Records reading (“the Akashic Record is a sacred energetic field that holds impressions of all that was, is, and will be, ” her website explains).

As the world of mediumship moves online, the different features each web platform offers lead to different relationships between psychics and their clients.

On the short-form video app TikTok, for instance, the black-box “For You Page” algorithm that decides which video clips a given user will see adds an aura of fate to the web surfing experience.

“I like the randomness of TikTok,” a tarot reader who works under the stage name Lynn Herbabae said. If you’re seeing a given tarot video, “you’re seeing it for a reason. People really like that. They’re like, ‘Okay, this came across my For You Page, so this is really meaningful for me.’ I believe that’s how (the) law of attraction works, and a lot of people believe that too.”

Herbabae was working online well before the pandemic – she needed to expand her clientele beyond her Arkansas town, where there’s “a lot of taboo” around tarot – but she has seen Covid-19 drive demand for psychics.

“I did have an increase in readings because there was so much uncertainty,” she said. “I think that’s when people start looking outside of what is right in front of them for answers.”

Indeed, multiple psychics reported that the death, sadness and boredom of the pandemic has prompted a surge in their business – echoing theories that spiritualism as a whole has its roots in nineteenth century anxieties around child mortality.

The pandemic has opened up new categories of work, too. Herbabae said the struggles of long-distance quarantine relationships have made love-life predictions especially popular, and she’s been asked to perform several psychic “body scans” to see whether someone had coronavirus. For US$30 (RM124), she said, she will use remote viewing – the same technique she uses to help clients find missing car keys and jewelry – to detect “red” in clients’ lungs; she claims to have identified two separate infections this way that were later confirmed by standard tests.

Hillary Nichols, who works out of New Jersey under the name Lady Layn Tarot, sells email-delivered tarot readings through Etsy – a “quick blunt message” will set you back US$22.22 (RM92), while a “past, present, future spread” comes in at US$33.33 (RM138) – as well as Patreon, where fans can subscribe to personalised monthly videos. Etsy charges a US$0.20 (80 cents) listing fee and takes a 5% cut of sales. Patreon offers several different membership plans, which take from 5% to 12% of users’ monthly income.

“In the beginning I wasn’t sure if it would work,” Nichols wrote over email. “I didn’t know if the distance would create a barrier for me. I did many, many free readings… to test out how accurate my readings would be when done online and to my surprise, it worked!”

Working, in this case, means the readings were “as good as in person” – judged on the basis of whether they resonated with the client. If a reading makes sense to someone or reflects a situation they’re currently in, “I consider it successful, ” Nichols said.

It’s a question many psychics asked themselves in the early days of their forced digitisation – can spiritual practices translate to the Internet? – only to conclude, quickly and out of no small necessity, that, yes, they can.

Perhaps it shouldn’t be a surprise. Fortune-telling and mediumship have been around for thousands of years; why would a few apps be what finally does them in?

“At risk of sounding crazy, time and space don’t exist in the spirit world,” said Macintyre, the Cameo clairvoyant. “It’s not (that if a client is) miles away, you can’t possibly feel his energy.”

How to Save $100 on Top-Selling Bose Kitchen Audio System

Donald Trump’s sister calls him ‘cruel’ in tapes made by niece – US politics...