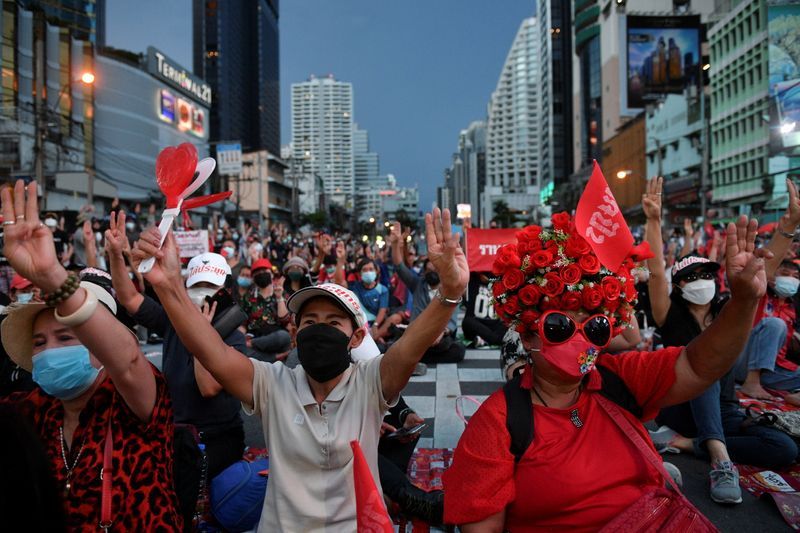 BANGKOK (Reuters) – Thousands of people protested in central Bangkok on Thursday to call for the resignation of Prime Minister Prayuth Chan-ocha and said they would return every day until he leaves office.

The demonstration at the Asoke intersection in central Bangkok was one of the biggest such gatherings this year despite a warning from the police earlier in the day that protests are banned due to coronavirus restrictions.

Protests against Prayuth have gained momentum since late June as groups who sought his removal last year return with broader support from people angered by a worsening coronavirus situation.

Thailand has recorded more than 1.2 million infections and 12,103 deaths since the pandemic started last year, with most of the cases and deaths occurring since April this year.

The demonstration is also taking place while Prayuth is facing a grilling in parliament in a censure debate https://www.reuters.com/world/asia-pacific/thai-pm-faces-parliamentary-grilling-protests-persist-2021-08-31 that started earlier this week. The political opposition accuse the prime minister and five other cabinet ministers of corruption, economic mismanagement and of bungling the coronavirus response.

Prayuth and his ministers have rejected the opposition accusations and defended their performance to parliament.

They are expected to survive the no-confidence vote scheduled for Saturday, due to the ruling coalition’s clear parliamentary majority, but the protesters say they will keep up pressure on Prayuth.

“The members of parliament have to chose between the people and Prayuth who has failed, causing losses and deaths of more than 10,000 people,” said Nattawut Saikua, one of the main organisers of the protest.

“If Prayuth passes the no-confidence vote and remains prime minister we will continue to drive him out,” he said.

While the demonstration at Asoke was peaceful, a smaller group of anti-government protesters set off fire crackers and burn car tires on Thursday near the prime minister’s residence in another part of the city.

‘Unimaginable’ for Austria’s Kurz to stay on if convicted, vice chancellor says

Cycling: More history made as the Kennys steal the velodrome show again