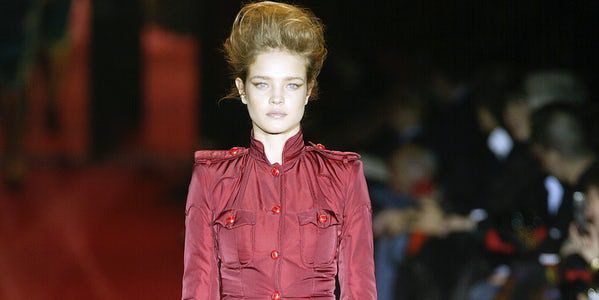 Emotion is the linchpin of a successful fashion show. Robin Givhan, the Pulitzer Prize-winning fashion critic, and I agreed as much when we were brooding on the subject earlier this week. Still, she insisted there’d never been one presentation that had actually brought her to tears. Months ago, at the beginning of this deeply personal litany of shows I have — not always rationally — loved, I mentioned how struck I was by my first encounter with floodgates at the finale. No basilisk I, I too would eventually succumb. A certain moistness, the occasional trickle of water from the eyes, all caught up in the fervour of the moment…Tom Ford managed to elicit that reaction twice during the Autumn/Winter 2004 season, first at Gucci, then 10 days later at Yves Saint Laurent as the curtain fell on his years as the creative dynamo behind the formation of the Gucci Group.

His wasn’t a long goodbye, but it was incredibly intense, and it was webbed with sadness, befitting a defining figure in fashion at the turn of the century. Ford couldn’t do what he did without complete control and, after the French financier François Pinault acquired the Gucci Group in 1999, there would inevitably be other people and budgets to answer to. So fashion’s Napoleon eventually met his Waterloo, but not before a send-off for the ages.

In the first flush of their union, Pinault acquired Yves Saint Laurent for the Gucci Group, with Ford continuing as creative director for Gucci while assuming the same role for ready-to-wear at YSL. Saint Laurent himself would stay in charge of haute couture. Given that a life lived on a fine edge of neurosis and addiction had inevitably caught up with Yves, the continuation of his couture was pretty academic by this point. He closed his house in 2002, which liberated him and his partner Pierre Bergé to ensure the remainder of Ford’s tenure at YSL was as miserable as possible. “Evil,” Tom would call them later, though he claimed he’d successfully blocked the whole period. “Yves Saint Laurent doesn’t exist for me.”

And yet — another sadness — Saint Laurent did once exist for Ford, as he existed for Marc and Miuccia and so many of Tom’s peers: Yves as arch inspiration, Yves as primogenitor of modern fashion. Taking on that legacy could have been a thrill, if only the OGs hadn’t been such bitter old queens. When Loulou de la Falaise, the iconic muse of the whole YSL saga, admitted she liked Ford’s clothes for the brand, even she was cast into the wilderness for a while. And, with immaculately poisonous timing, Saint Laurent and Bergé opened their foundation devoted to the preservation of Yves’s legend the same week as Ford’s last show for YSL. 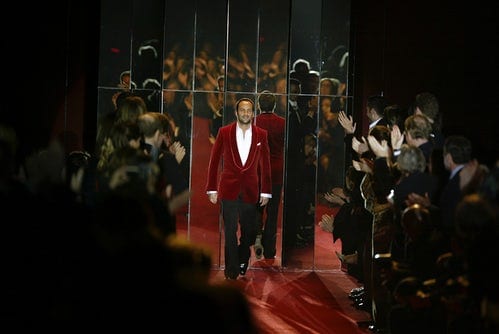 That’s a lot of back story, but it makes the point that the best shows express more than a designer’s reflection on one single season. In this case, much, much more. Ford spent his time at Saint Laurent sampling the various stories Yves had told over the years (his successors Stefano Pilati, Hedi Slimane and Anthony Vaccerello would do, to varying degrees, exactly the same thing). His last outing tapped Les Chinoises, the collection that coincided with the launch of YSL’s epochal fragrance Opium. How could any young gay kid living in New York in 1977, as Ford was, not know about the notorious party that celebrated Opium’s arrival in America, with guests ending the evening in a decadent blizzard at Studio 54? And how much would such a boy dream to be part of that world one day?

Youthful wish fulfilment…it’s a potent spur to adult creativity. The first thing Ford did when he took over at Saint Laurent was reconceptualise the original ad campaign for Opium, which featured Jerry Hall sprawled in a narcotic transport, swathed in Yves’s gilded finery. Tom’s version featured a similarly eroticised Sophie Dahl, stark naked this time, her red hair and marble-white skin highlighted against a midnight velvet backdrop. So it made perfectly circular sense that the last thing Ford created for Saint Laurent was a collection that also referenced Opium.

But he did it his way, so confidently that it made me wonder at the time if this was Ford’s way of flipping the bird at the Evil Queens. You imagine that, in the midst of the frustration at the breakdown of the relationship with Pinault, there must also have been some satisfaction in offering a collection that left such an authoritative thumbprint on unfinished business. That was the difference between this show and the Gucci farewell a week earlier. There, Ford had a decade to consummate his vision. The fluffy pink fur catwalk and the finale shower of rose petals said “upbeat” in some oblique way. People were sad-but-happy at the end. With Saint Laurent, the mood was different, heavier, darker. This was truly a break-up goodbye.

A cello plangently sawed away at the theme from “In the Mood for Love”, a chorale of voices sang The Beatles’ “Because” for the whole closing passage. “Love is all, love is you.” Beautiful, but resigned and maybe even a little mournful. That sensation lasted all of a mini-second between the models leaving the runway and Ford stepping out in a red velvet dinner jacket to Beyoncé’s “Crazy in Love”. Take that, world! If I’m down now, I will never be OUT! The audience rose as one in recognition.

The clothes Ford showed offered his own singular take on Saint Laurent’s chinoiserie. The silhouette was fundamentally the same as the signature he’d presented at Gucci, the fitted jacket with the slight peplum-ed flare, the pencil skirt ruched for maximum slink, the epitome of the disco-fied glamour with which Ford had transformed fashion. There was the shine of silk, the sheen of satin. But here, there were also emphatic pagoda shoulders, and – more than anything – a colour palette that reconfigured Yves’s own way with unlikely combinations as a rich, opiated fever dream. A perfect compliment to the Yves, the Master, if only he’d cared to look. Then came fabulous fishtailed gowns embroidered with dragons and Chinese emblems, second-skin columns lacquered with sequins, elongated cheong-sams in excelsis. Elise Crombez’s red version starred in the Metropolitan Museum’s “China: Through the Looking Glass” blockbuster in 2015.

Ford may have claimed he’d blocked his Saint Laurent years but he also acknowledged some of his best collections were there. And this was his best. I’ve already said there were tears. Backstage, even my heartbreakingly handsome cameraman, the late, great Portugeezer Luis Fernandes, confessed to Ford that he’d had a lump in his throat at the end. Propriety prevents me from passing on Tom’s typically risqué response.

The images in this review are courtesy of INDIGITAL.TV and Fashionology.com