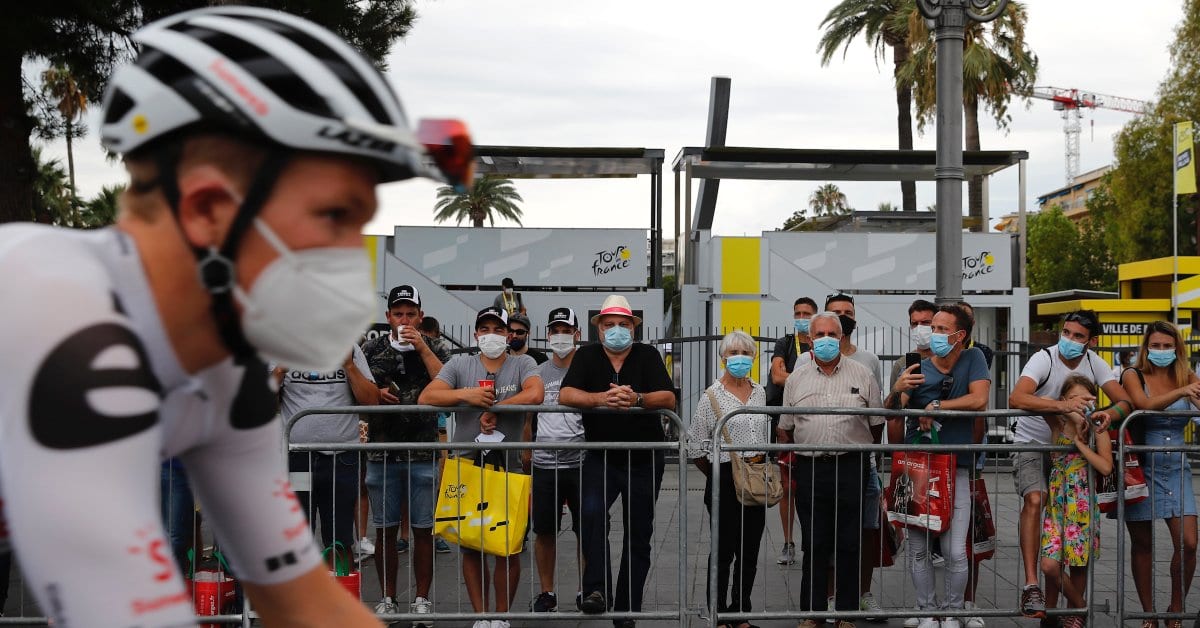 (NICE, France) — Delayed but alive again and out on French roads, the strangest Tour de France ever set off Saturday in a bubble of anti-COVID protocols to try to keep the 176 riders virus-free for three weeks of racing through the country’s worsening epidemic.

Only after riders peeled off their face masks and raced off from the start in the Mediterranean city of Nice, serenaded by a uniformed band playing “La Marseillaise,” did the Tour begin to look like its old, pre-COVID self, immediately delivering thrills and spills as storms made the roads as slippy as ice.

But with fans kept firmly at arm’s length, told by the government that it was best to stay home and watch the racing on television, the Tour lost much of its festive atmosphere. There was very little of the usual up-close communing between athletes and their adoring public that made the venerable 117-year-old rolling roadshow so unique among sports events in more carefree times.

Powering past thin crowds on the finishing straight in Nice that would usually have been crammed with spectators rows deep, Norwegian rider Alexander Kristoff won the first stage with a fearsome final sprint. He celebrated by giving a COVID-sensible fist-bump to a teammate.

Winning Stage 1 earned Kristoff the first yellow jersey of the 2020 Tour, which he will wear as the race leader on Sunday’s Stage 2 that loops into the mountains behind Nice. Usually, a race official or a VIP would have helped him slip into the iconic jersey, one of the most coveted and recognizable in sports. But not this year, with social distancing the priority.

Kristoff stood alone on the winner’s podium, flanked by a host and a hostess a safe distance away. He then disappeared backstage to wriggle into the jersey himself, before coming back out to pose for photos. Still, the thrill of wearing the jersey for first time in his eight Tours more than outweighed the weirdness.

“An amazing feeling,” he told reporters at the finish. “It means a lot for my career and a stage win shows I can still be up there even at 33 years old and with four kids.”

With infections rising steadily across France, the Tour has no guarantees of reaching the finish in Paris on Sept. 20. Riders will have daily health checks and coronavirus tests during the race, and can be tossed out if they fail them. Entire teams could be sent home if two or more riders or staff test positive for COVID-19 within a week. Fans have been told not to approach riders for selfies or autographs and to always wear masks.

Jean-Michel Blanquer, the French minister in charge of sports, was upbeat at the start Saturday, saying the Tour only has a “very slim” chance of being canceled before Paris but also cautioning that “everything is possible.”

“That type of thing could happen but of course I hope that it won’t and I think that it won’t because the Tour organizers have done an extraordinary job,” he said.

Fans who have waited for Tour action to resume, after the race was pushed back from July, were rewarded with high drama on the 156-kilometer (97-mile) first stage that did three loops around Nice and hilly backcountry to the city’s north. Rain storms turned the tarmac so slick that riders eventually made a pact between themselves out on the road to dial back the pace after multiple crashes.

Among the most dramatic was Colombian rider Miguel Angel Lopez skidding headfirst into a road sign. He labored on to the finish. Another crash took out a heap of riders in the dash to the line on Nice’s splendid seafront.

“People were crashing almost on every corner,” said Kristoff. “It was really slippy out there.”

UP election: Are women really thriving in Uttar Pradesh as PM Modi claims?