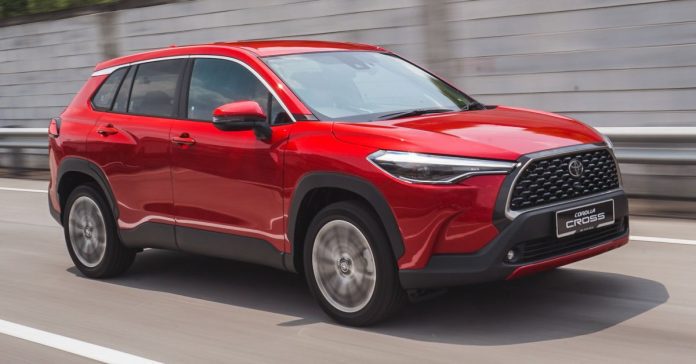 It appears that the Toyota Corolla Cross may be sold in the United States after all. This follows recent sightings of a fully camouflaged test mule making the rounds in the country, one that had been equipped with amber turn signals. Usually, this is a clear sign that a vehicle is being developed for the US market, but nothing is set in stone just yet.

The first ever Corolla Cross was unveiled in Thailand in July 2020, and it is currently sold in a number of ASEAN markets, as well as Brazil and other Latin American countries. In most markets, the car is offered with a 1.8 litre mill (hybrid and regular ICE), but the Brazilian-made model gets a larger direct-injected 2.0 litre flex fuel engine plus a 1.8 litre hybrid.

According to Automotive News, the Corolla Cross may not undergo any significant changes should it be introduced in the US. It will likely share the same 2.0L and 1.8L hybrid engine offerings that are available in South American markets, but even that is just speculative for the time being. Meanwhile, its rival, the all-new Honda HR-V is also set to be launched in the US market. While the US-bound Corolla Cross won’t see much alterations done to it, reports say the North American version of the HR-V will be “designed to meet the distinct needs of US customers,” with primary adaptations made to the cabin.

Honda large project leader, Kojiro Okabe told Automotive News that the next-gen HR-V will be based on a slightly bigger platform with a more rugged styling. It could also feature a more upright rear end instead of the coupe-like proportions of the Japanese model, thus offering a roomier and more practical boot space. In 2020, Honda sold 84,027 units of the HR-V in the US, its fifth best-selling vehicle in the country.

JPJ eBid: SYU and SMG number plates up for bidding