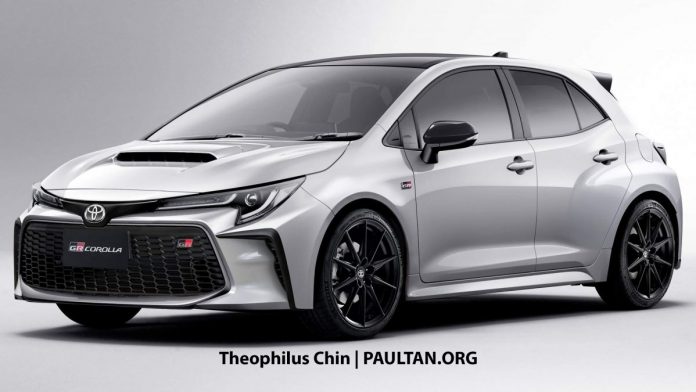 It’s clear that Toyota want to bottle that GR Yaris magic and sell it in as many permutations as possible. The rally-inspired engine and drivetrain package will reportedly make its way to the larger Corolla as a more mature and surefooted rival to the madcap Honda Civic Type R.

We’re waiting with bated breath to see exactly what the hot hatch will look like, so it’s a good job that resident Photoshop wizard Theophilus Chin has whipped up a couple of renders of the GR Corolla. The result is a rather tasty-looking machine that adds a menacing edge to an already aggressive-looking five-door base.

The front end takes plenty of inspiration from the recently-revealed GR 86, with a massive downturned lower grille and vertical corner air intakes. There’s also a sizeable Subaru WRX-style bonnet scoop, though don’t expect the actual car to have it, given that the GR Yaris doesn’t sport one, either – the latter’s G16E-GTS 1.6 litre turbocharged three-cylinder engine, which the Corolla will likely share, has a front-mounted intercooler.

Moving to the side, one can spot the handsome eight-spoke alloys from the GR Yaris. They’re housed within deliciously flared fenders, which are in line with rumours that the GR version will be 20 mm wider than the stock Corolla. A large rear diffuser with twin round tailpipes, another design cue from the GR Yaris, can be found at the rear, flanked by a pair of (likely fake, unfortunately) bumper vents. The real GR Corolla should have more than enough firepower to justify the juicy aesthetic flourishes – the engine in the GR Yaris produces 272 PS and 370 Nm of torque in Japan (other markets, including Malaysia, get slightly lower outputs of 261 PS and 360 Nm).

Sadly, the larger, heavier Corolla isn’t expected to receive any more power – the mill is already pretty high-strung as is – so it will likely be at a significant disadvantage compared to the Civic Type R. Hopefully, the Yaris’ trick all-wheel drive system, which can send up to 70% of torque to the rear wheels, will be enough to make up the difference. A six-speed manual should be the sole gearbox offered.

Interestingly, the GR Corolla is also due to spawn a Touring wagon version, which will be even sweeter news to enthusiasts. Given that Theophilus is a big fan of wagons, we’re expecting another render sooner rather than later…

US needs to do more to protect companies against state-sponsored cyberattacks, experts say