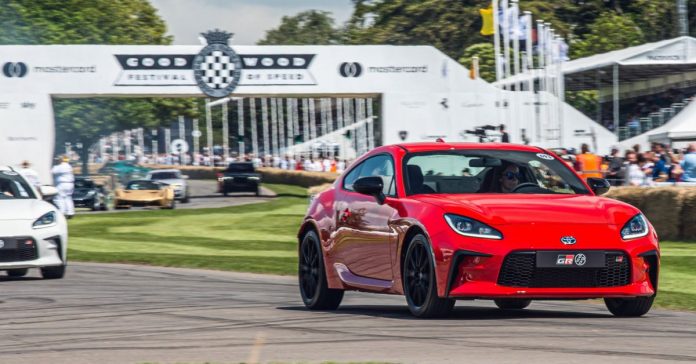 The Toyota GR 86 has made its dynamic debut in the United Kingdom at this year’s Goodwood Festival of Speed, which took place over the weekend. The new sports car joins other models in Toyota’s GR line-up that were also present at the event, namely the GR Yaris and GR Supra, the latter being the exclusive Jarama Racetrack Edition.

The successor to the GT86 (also known as the 86 in other markets) will be launched in the UK next year, and it will retain its predecessor’s front-engine, rear-wheel drive setup as before. However, it benefits from a larger and more powerful 2.4 litre four-cylinder “boxer” flat-four engine, along with a 50% increase in torsional rigidity.

The former makes 235 PS (232 hp) and 250 Nm of torque, with drive directed to the rear wheels via a six-speed manual or automatic transmission. Meanwhile, a reinforced chassis mounting system creates the more rigid platform, onto which a redesigned body sits on top. The dimensions and weight don’t see much of an increase, with both being hallmarks of the previous car.

First revealed in April, the GR 86 is the close sibling to the second-generation BRZ that was revealed earlier in November last year. Both cars are a result of the continued partnership between Toyota and Subaru, with both previously working together on the original BRZ and GT86.

Aside from the new GR models, Toyota also brought along its rare rally cars to take on the festival’s forest stage, including the Celica RA40 and GT-Four ST 185. Additionally, Toyota Gazoo Racing UK had the Speedworks Motorsport-prepared BTCC Corolla take on the festival timed shootout competition, while a BTCC Corolla hybrid development car also made its debut.

My Pet Story: Captivated by a child musang