The 2022 Toyota Land Cruiser 300 is hot commodity. While prospective customers may have to wait up to four years to get their SUVs delivered, the lucky few can already start shopping for aftermarket accessories.

One such offering is from Liberty Walk, which teamed up with Sphere Light to produce a brand new widebody kit for the Land Cruiser 300. The LB kit looks relatively more subdued compared to Kato Wataru-san’s other works, but still enough to make the gargantuan SUV stand out even more.

Up front, there’s a new front lip that creates a more squared fascia, replete with integrated skid plates and six-point LED DRL modules. The factory radiator grille and LED projector fog lamps are retained, but the Toyota lettering in the grille gets replaced with a Liberty Walk script instead. 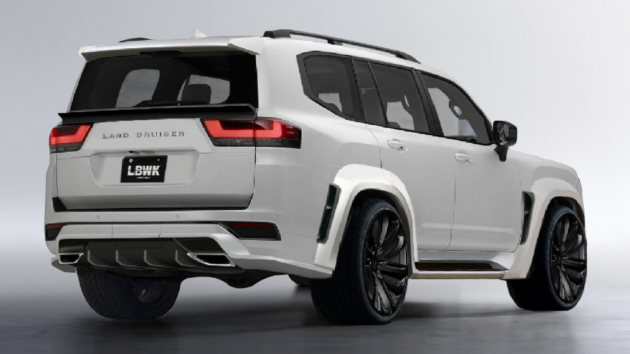 Other parts of the kit include a new bonnet with dry carbon-fibre finish, flared vented fenders at each corner, a carbon-fibre ducktail spoiler, plus a new rear bumper with integrated diffuser and exhaust finishers. The size of the wheels aren’t mentioned, but those are presumably 23- or 24-inch hoops.

As for pricing, the basic kit (all of the above, minus the wheels) will cost 627,000 yen, or equivalent to RM24k. That’s excluding shipping, import duties and installation. First shipments are expected to take place in January 2022. So, what do you think? Too much?