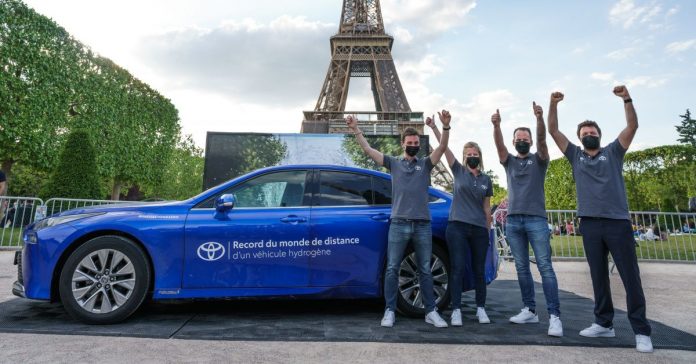 Toyota has managed to set a new world record for the longest distance travelled by a series production, hydrogen-powered vehicle, with a Mirai managing to cover 1,003 km on a single fill of hydrogen. This exceeds the previous record holder, a Hyundai Nexo, that ran for 887.5 km in Australia just a few weeks ago.

According to the Japanese carmaker, the Mirai started its journey on May 26 at 5.43am from the HysetCo hydrogen station in Orly, France before being driven on public roads, south of Paris and in the Loir-et-Cher and Indre-et-Loire areas.

Four drivers were responsible for the record attempt, including Victorien Erussard, the founder and captain of Energy Observer (a hydrogen-powered boat); James Olden, an engineer at Toyota Motor Europe; Maxime le Hir, Mirai product manager; and Marie Gadd, PR manager of Toyota France. All of them adopted an “eco-driving” style, although the company said there were “no special techniques that could not be used by everyday drivers.”

Under the watchful eye of an independent authority that also certified the vehicle’s distance travelled and consumption, the Mirai’s average fuel consumption was 0.55 kg/100 km and the remaining range on the trip computer was nine km. The fuel cell electric vehicle (FCEV) can store up to 5.6 kg of hydrogen and it takes less than five minutes to refuel at a 700 bar refuelling station.

“It’s an amazing challenge that we achieved with the new Mirai. Internally, it is the mindset of ‘Start your Impossible’, going beyond our own limits, that drives us, and we proved it again today,” said Frank Marotte, CEO of Toyota France.

“I would like to thank the teams of Toyota France and Toyota Europe, as well as Victorien at Energy Observer, with whom we share the same vision and the same ambition. It is by strong partnerships that we will be able to contribute to a better and more environmentally-friendly society. With Toyota’s ambition to go ‘Beyond Zero’ in mind: take a seat for the future,” he added.

Dear Thelma: I’m called names and bullied for being overweight