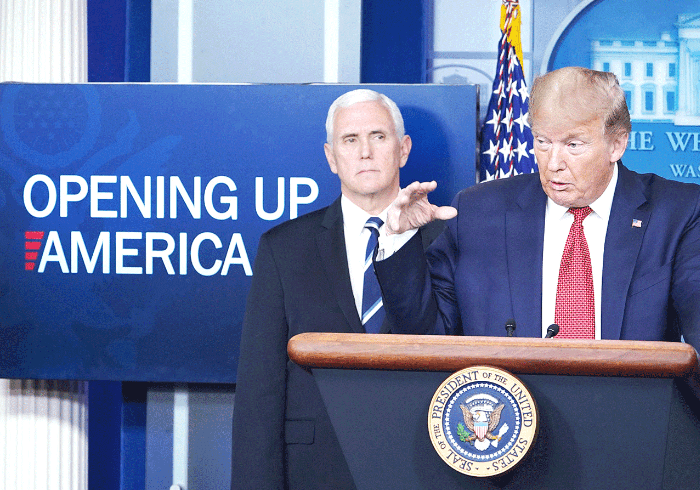 WASHINGTON: President Donald Trump on Thursday laid out guidelines for a gradual reopening of the United States after the battering of the coronavirus pandemic, saying normal life should resume quickly in some states.

Trump’s new push came as he saw progress in his campaign to pressure China, with fellow Western leaders agreeing that Beijing has not been transparent on the origins of the virus that has infected more than 2.1 million people.

Facing re-election in November, Trump has been impatient to lift a lockdown that has thrown 22 million people out of work in the world’s largest economy, although plenty of leaders at home and abroad fear that hastily easing restrictions will cause more people to die.

“Based on the latest data, our team of experts now agrees that we can begin the next front in our war. We’re opening up our country,” Trump told a news conference.

The United States accounts for the most Covid-19 deaths of any country, with almost 33,000 of the nearly 144,000 fatalities worldwide.

But pointing to sparsely populated parts of the country, Trump said some states were already free from the impact and can open ‘literally tomorrow’.

“We have large sections of the country, right now, that can think about opening,” he said.

The White House outlined three ‘phases’ under which each governor would determine the permitted size of gatherings depending on their location and levels of infection.

Trump’s recommendations were a far cry from his previous calls for a sudden end to social distancing measures – as well as his earlier call for the nation to be fully open in time for Easter on April 12.

He also pulled back from a battle over authority, with governors ultimately deciding what to do – as was the case before his announcement.

Hours earlier, Governor Andrew Cuomo of New York, the US epicenter of the virus, said he was extending the shutdown there until May 15 despite signs of progress.

“I would like to see that infection rate get down even more,” Cuomo said, reporting that 606 people had died in the last day, the lowest number in 10 days. — AFP