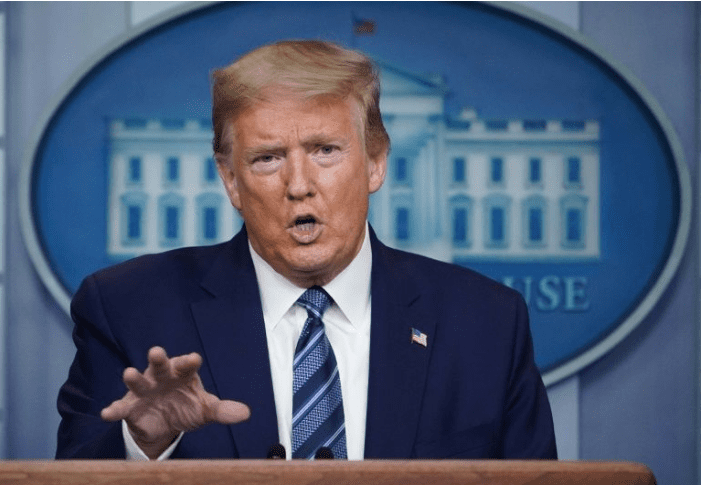 WASHINGTON: President Donald Trump confirmed he would sign an order on Wednesday partially blocking immigration to the United States, in a move he argues would protect workers from the economic fallout of the coronavirus pandemic.

Immigration is a key issue for Trump’s conservative base, which he is keen to energize ahead of the November election.

“I will be signing my Executive Order prohibiting immigration into our Country today,” he said in a tweet.

The president said on Tuesday that he would stop the issuing of green cards — permanent residency permits — for 60 days, but would exempt temporary workers such as seasonal farm laborers.

“It will help put unemployed Americans first in line for jobs as America reopens,” he said Tuesday. “It would be wrong and unjust for Americans to be replaced with immigrant labor flown in from abroad.”

About 22 million Americans have lost their jobs since the outbreak forced a global shutdown — shattering Trump’s hopes of touting a booming economy in the run-up to the election.

The US — with 45,000 deaths and more than 825,000 coronavirus infections — is the world’s hardest-hit country, and health care infrastructure in hotspots such as New York has struggled to cope.

The executive order on immigration will likely spark court action to reverse it, and has raised hackles among his Democratic opponents.

Texas lawmaker Joaquin Castro slammed what he called “an attempt to divert attention away from Trump’s failure to stop the spread of the coronavirus and save lives.”

The Supreme Court has in recent months offered several significant victories to the Trump administration on immigration.

A month ago, the court allowed the federal government to maintain a policy that will send more than 60,000 asylum seekers back to Mexico.

Trump added in his tweet on Tuesday that “even without this order, our Southern Border, aided substantially by the 170 miles of new Border Wall & 27,000 Mexican soldiers, is very tight.”

Trump’s administration is keen to get America back to work and has said there are enough coronavirus tests for each state to move to “phase one” of a gradual reopening, ending some stay-at-home restrictions.

But several state governors have complained of a lack of testing capacity and a fear of sparking a fresh surge in infections.

The director of the US Centers for Disease Control on Tuesday also warned Americans to prepare for a more ferocious second wave of the virus later this year. – AFP