Netflix’s The Crown and The Queen’s Gambit combined with Apple TV+’s Ted Lasso win top series honours at the Sunday’s Emmy Awards (Sept 19), a first for streaming services that cemented their rise to prominence in the television industry.

The Crown stars Olivia Colman and Josh O’Connor won the top drama acting honours, with Jason Sudeikis, star of the warm-hearted Ted Lasso, and Jean Smart of the generation-gap story Hacks, winners on the comedy side.

Colman and O’Connor were a winning fictional mother-son duo: She plays Queen Elizabeth II, with O’Connor as Prince Charles in the British royal family saga that combines gravitas and soap opera.

“I’d have put money on that not happening,” Colman said of the award, calling it “a lovely end to the most extraordinary journey” with the show’s cast and creators.

She cut her remarks short, explaining why she was growing tearful. “I lost my daddy during Covid, and he would have loved all of this.” she said. O’Connor gave a shoutout to Emma Corwin, who played opposite him as Princess Diana and was also a nominee Sunday, as a “force of nature.”

He also offered thanks to his grandparents, including his grandmother who died a few months ago, and his grandfather, Peter O’Connor, for the “greatest gifts” of kindness and loyalty.”

Sudeikis, who also produces the series that many viewers found a balm for tough pandemic times, gave a speech that evoked the chipper, upbeat character he plays in the series about a British soccer team and its unlikely American coach.

“This show’s about families and mentors and teammates, and I wouldn’t be here without those things in my life,” said Sudeikis.

He also thanked his fellow castmates, saying “I’m only as good as you guys make me look.” 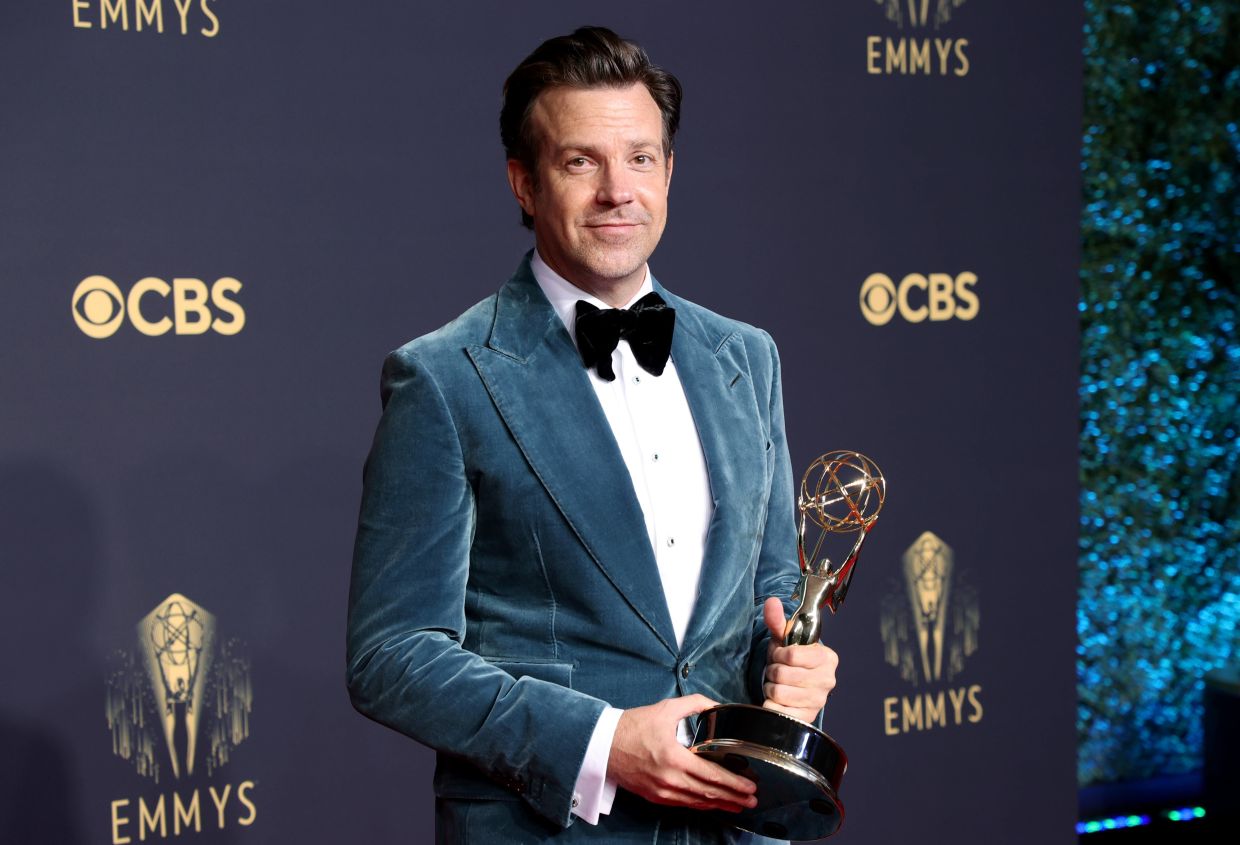 Earlier in the evening, ebullient Ted Lasso castmate Hannah Waddingham, winner of the best supporting actress award for a comedy, said Sudeikis “changed my life with this, and more importantly my baby girl’s.”

The show’s Brett Goldstein, who won the counterpart award for supporting actor, said he had promised not to swear and either mimed or was muted for a few seconds, then called the show the “privilege and pleasure” of his life.

Smart, who received a standing ovation, began her acceptance speech on a somber note: Her husband actor, Richard Gilliland, died six months ago.

“I would not be here without him” and his willingness to put her career first, said Smart.

She also praised their two children as “courageous individuals in their own right.” 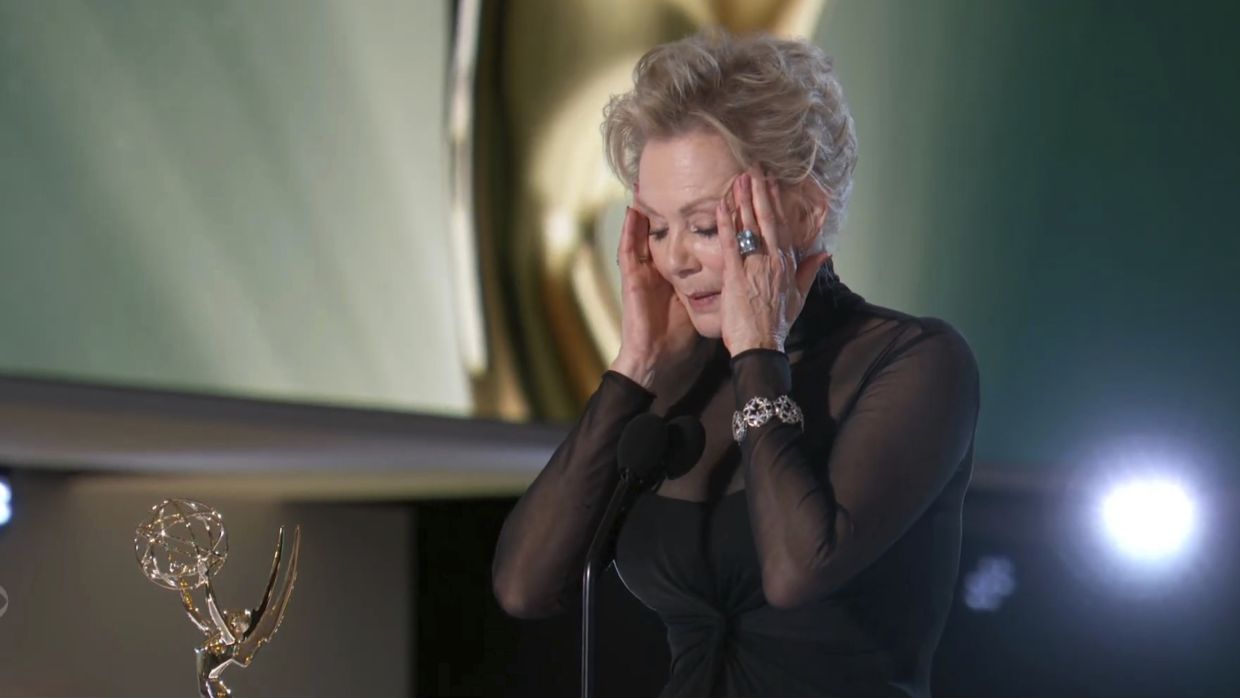 Gillian Anderson and Tobias Menzies of British royal drama The Crown were honoured for their supporting performances.

The series also picked up writing and directing honours.

Anderson, who played British political leader Margaret Thatcher, used her acceptance speech to thank her manager of 20 years for her mentorship and believing in her talent before she did.

Menzies who plays Prince Philip, didn’t attend the ceremony, which included a London gathering for The Crown nominees.

“Michael was a brilliantly talented actor and a generous human being who has left us far too soon,” Washington said.

Another lost star was remembered by John Oliver of Last Week Tonight with John Oliver.

“No one was funnier in the last 20 years than Norm Macdonald on late-night comedy,”

Oliver said in accepting the Emmy for best variety talk show, suggesting people spend time checking out clips of Macdonald, as he did after Macdonald died Sept 14 at age 61. 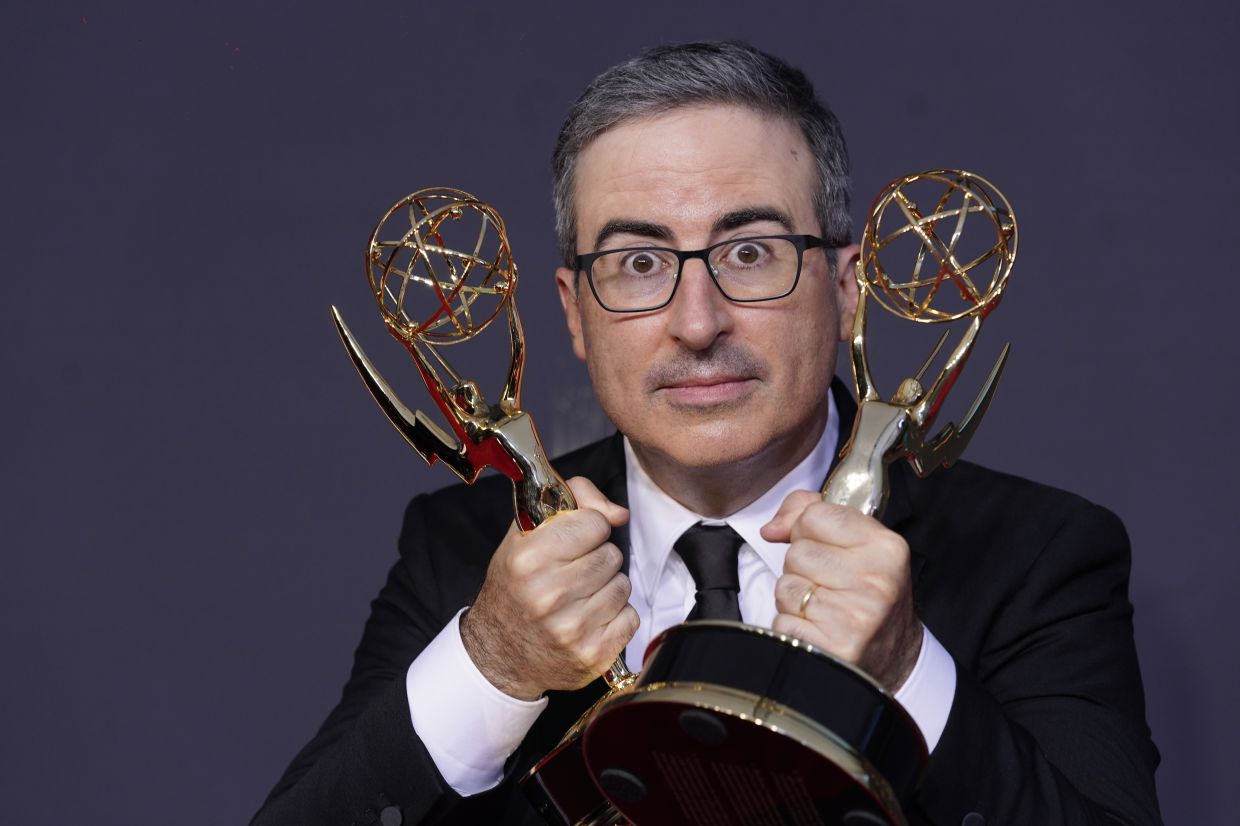 John Oliver with the award for outstanding writing for a variety series and outstanding variety talk series for ‘Last Week Tonight with John Oliver’. Photo: AP

Kate Winslet, who played the title character in Mare of Easttown, and Ewan McGregor, who starred in the fashion biopic Halston, were honoured as top actors for a limited series.

Winslet saluted her sister nominees in “this decade that has to be about women having each other’s back.”

“The script was “true to the horror and beauty of ordinary people’s lives,” particularly the lives of women, said Nicholson. 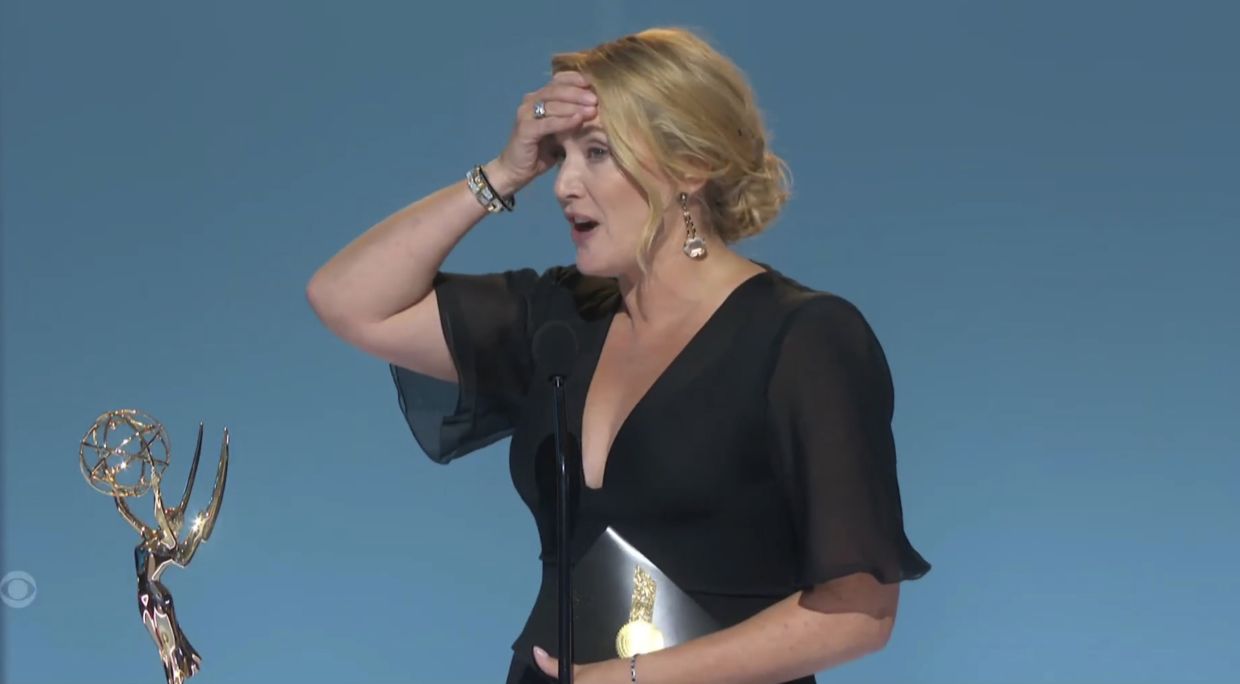 Kate Winslet accepts the award for outstanding lead actress in a limited or anthology series or movie for ‘Mare of Easttown’. Photo: AP

Debbie Allen received the Governors Award for a long and acclaimed career as an actor, dancer, choreographer and activist

“I am trembling with gratitude and grace and trying not to cry… it’s been many years in the making, taken a lot of courage to be the only woman in the room most of the time. Courage and creative and fight and faith to believe I could keep going, and I have,” she said.

The show opened with a musical number that featured host Cedric the Entertainer rapping a modified version of the Biz Markie hip-hop hit Just a Friend with lyrics like “TV, you got what I need.”

LL Cool J bounded from the audience as stars like Rita Wilson, Mandy Moore and more dropped verses celebrating the breadth of television. 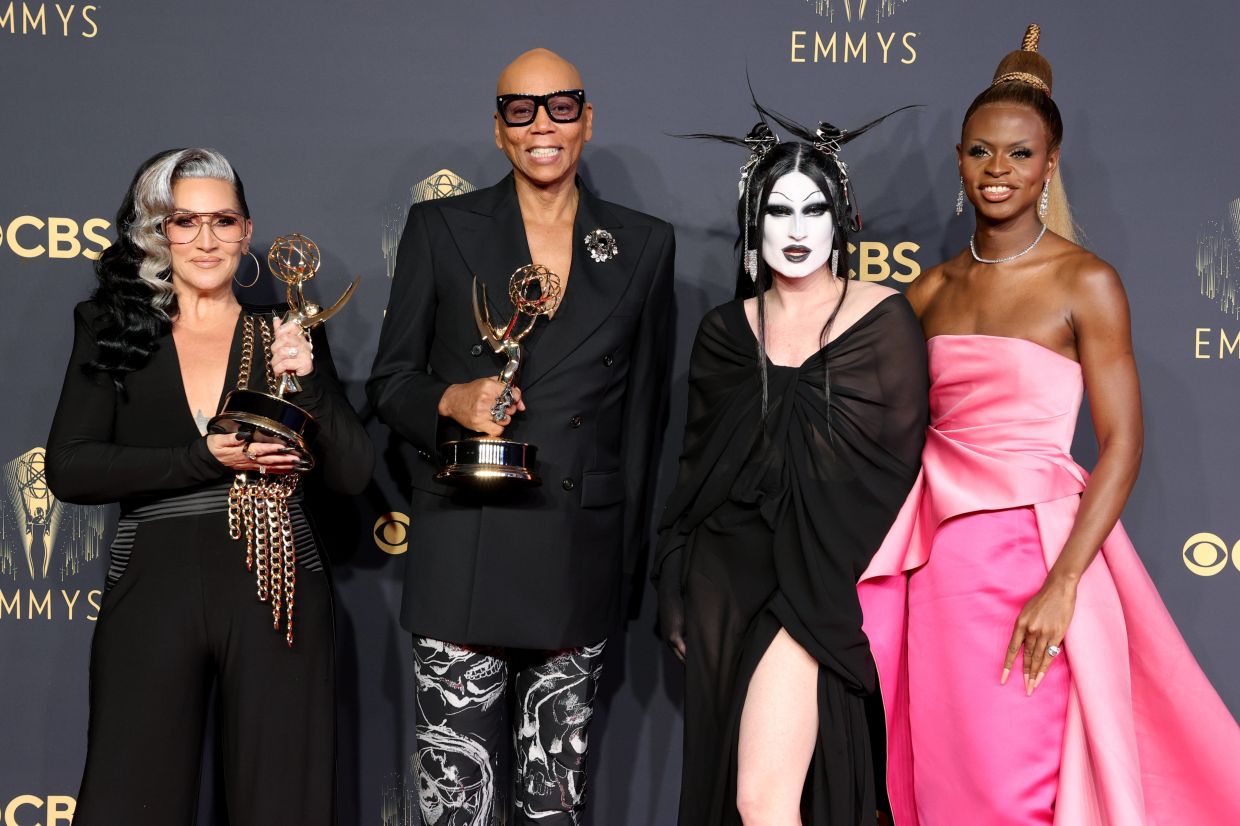 Seth Rogen presented the first award, throwing some cold water on the celebratory vibe by noting that the Emmys were being held in a giant tent.

“There’s way too many of us in this little room,” he exclaimed in what seemed to be an attempt to be funny that fell flat. “Why is there a roof? It’s more important that we have three chandeliers than make sure we don’t kill Eugene Levy tonight. That is what has been decided.”

Cedric the Entertainer worked hard and landed some laugh-getting jokes, but the night’s comedy bits were hit and miss – including Stephen Colbert’s jokes about California’s failed gubernatorial recall and Ken Jeong’s effort to get past security and into the show. – AP