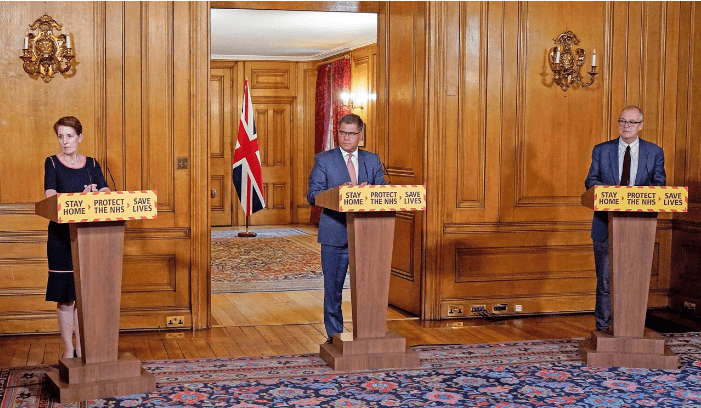 LONDON: Britain’s death toll from the coronavirus rose by 847 on Friday, health ministry figures showed, a slightly slower increase than the previous day but still among the worst rates globally.

The rise takes the total number of deaths in UK hospitals from Covid-19 to 14,576, leaving Britain behind only the US, Italy, Spain and France.

The grim statistics came as British authorities said they had launched a taskforce to spearhead efforts to create and mass produce a coronavirus vaccine.

The government faces mounting criticism of its strategy to end a nationwide lockdown introduced on March 23, and renewed on Thursday for at least three more weeks.

“This taskforce is up and running and aims to ensure that a vaccine is made available to the public as quickly as possible,” Business Secretary Alok Sharma told a Downing Street press conference.

Sharma said 21 new research projects focusing on the virus will receive government backing from a £14 million (US$18 million, 16 million euros) investment fund to develop treatments and vaccines as quickly as possible.

But he warned Britons should be “under no illusions” about such a “colossal undertaking.

“There are no guarantees, but the government is backing our scientists, betting big to maximise the chance of success.”

Vallance added that the government was adopting a broad approach because “each single project does not have a high probability of success.”

Researchers at the University of Oxford said Friday that its volunteers could be given the first dose of a potential vaccine within the next week.

Britain remains among the countries worst-hit by the pandemic, with the latest data showing the number of reported infections has climbed to nearly 109,000.

Prime Minister Boris Johnson himself contracted Covid-19 and, after a week in hospital that included three days in intensive care, is now recovering at Chequers – the country estate of British premiers.

Foreign Secretary Dominic Raab has been deputising in his absence. Despite the rising toll of deaths and new infections, the government insists its lockdown is working and points to signs the pandemic is peaking in Britain, where the infection rate is believed to have dropped markedly.

“The worst thing we could do now is ease up too soon,” Sharma said. — AFP