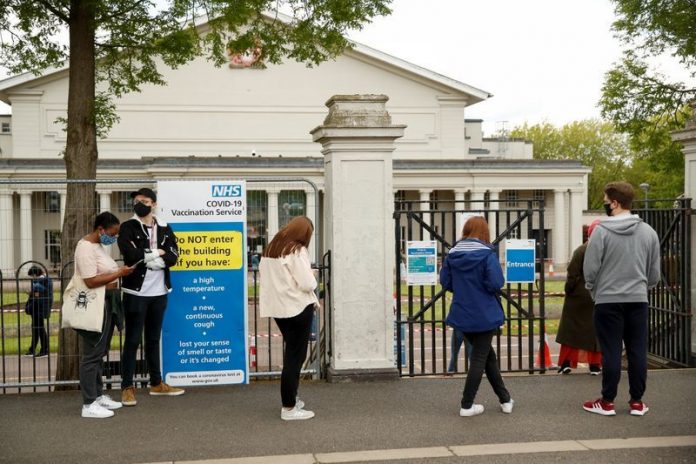 OXFORD, England (Reuters) – Britain’s Health Secretary Matt Hancock said on Friday vaccinating children in the United Kingdom against COVID-19 would take priority over donating vaccine doses to other countries around the world.

Britain’s medicine regulator on Friday approved Pfizer/BioNTech’s vaccine for use in 12-15 year olds, but global health bodies warn that if rich countries prioritise low-risk members of their own populations over broadening access globally, they risk disaster.

Asked he would prioritise vaccinating teenagers over more vulnerable people globally, Hancock said: “My first duty as health secretary for the UK is to make sure that the UK is protected and safe.”

“Whilst thankfully children are very rarely badly affected by COVID themselves, they can still pass on the disease, and so that is my first duty,” Hancock told Reuters after a meeting of G7 healthcare ministers in Oxford, central England.

“Alongside that I’m working with my international colleagues to make sure that people can get access to the vaccine around the world.”

Hancock had hosted health ministers from the Group of Seven (G7) rich countries met at the University of Oxford, where AstraZeneca’s COVID-19 vaccine was invented, ahead of a G7 leaders’ meeting next week.

The ministers agreed a new set of standards to improve clinical trials, as well as support for vaccine donations when domestic circumstances allowed.

But although Britain has given a first COVID-19 vaccine to three-quarters of adults, and fully vaccinated half the adult population, Hancock said the country was not yet in a position to donate doses.

Britain has ordered over 500 million doses of COVID-19 vaccine for its population of 67 million, most of which are two-shot vaccines.

“As and when the UK has excess doses of vaccine, then, if we don’t need them, we’ll make sure they’re available to others,” Hancock said.

“But at the moment we don’t have any excess doses, because as soon as the doses are available for the UK, we get them injected into British arms.”

Biden has also voiced support for a vaccine patent waiver to boost vaccine production and allow more equitable distribution of shots, but Britain and some European countries have expressed reservations.

Hancock said Britain had already taken a huge step by making the Oxford/AstraZeneca shot available at cost, citing how half a billion doses of the vaccine had already been delivered globally.

“The truth is you don’t need an IP waiver in order to deliver vaccines, without any charge for the intellectual property rights, you can just get on and do it,” Hancock said.

“It doesn’t need us to change the intellectual property rules because they are important rules for future investment in future vaccines.”

(Reporting by Alistair Smout in Oxford, additional reporting by William James and Paul Sandle in London; editing by Michael Holden)