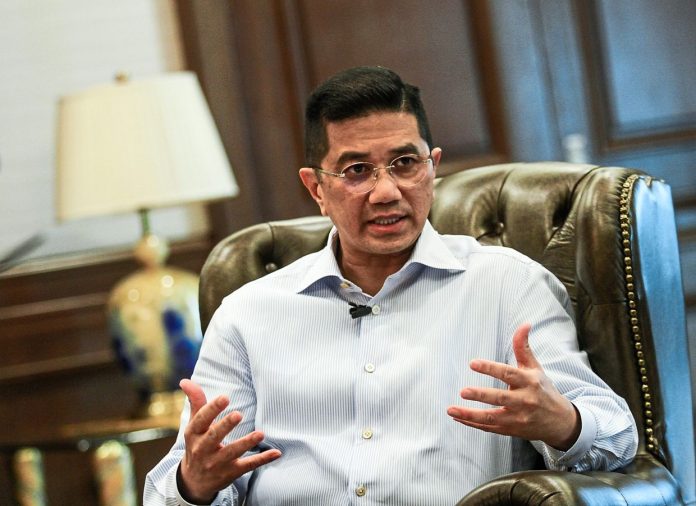 In unison: (From left) Annuar, Azmin, Vigneswaran and Takiyuddin say that Ismail Sabri’s and Hishammuddin’s appointments are well-deserved and that both ministers have a great deal of experience under their belts.

“I congratulate Ismail Sabri on his appointment as the Deputy Prime Minister. The stability of the country and the peace of the nation is a team effort.

“I also congratulate Hisham-muddin on his appointment as a Senior Minister. I am sure his experience and capability will strengthen the government.

“Strong together, win together,” said Azmin, who is currently on an official trip to Qatar.

Law and Parliament Minister Datuk Takiyuddin Hassan, who is also the PAS secretary-general, said that the appointments announced by Prime Minister Tan Sri Muhyiddin Yassin took into consideration the ministerial experiences of both Ismail Sabri and Hishammuddin.

“The appointment is based on his experience as a minister and senior minister, as well as him being the most senior Umno leader in the Perikatan Cabinet.

“We also congratulate Hishammuddin who was appointed a Senior Minister.

“He is also an experienced minister and will be able to work together with the rest of the Cabinet to take Malaysia higher in the international arena,” said Takiyuddin in a statement.

Federal Territories Minister Tan Sri Annuar Musa said Ismail Sabri’s appointment was in line with him being the most senior Umno vice-president and minister in government.

“Hishammuddin will also further strengthen the government in his new capacity as a senior minister,” said Annuar when contacted.

“Both will be of much assistance to the Prime Minister in the recovery of the nation,” he added.

MIC president Tan Sri M. Vigneswaran said despite Barisan Nasional not being a component of the Perikatan coalition, it is heartening to note what he described as the acknowledgement of its support for the government.

“MIC, as a Barisan component party, welcomes the announcement of the appointments of Ismail Sabri to the post of Deputy Prime Minister and Hishammuddin to the post of Senior Minister.

“MIC also appreciates the magnanimous attitude of other parties in the Perikatan government for allowing Barisan to hold the Deputy Prime Minister post, despite the fact that Barisan is currently not a component of the Perikatan coalition,” he said.

Vigneswaran added that he hoped the two appointments would put to rest all the politicking to allow the government to focus on fighting the pandemic and economic situation.

“Let us focus on the people’s well-being now,” said Vigneswaran.

Pekan MP and former prime minister Datuk Seri Najib Razak, in a Facebook post, said he thought there would be exciting announcements regarding the Covid-19 situation, such as updates on the loan moratorium process.

Nevertheless, he congratulated his party colleagues Ismail Sabri and Hishammuddin on their appointments.

“We would also like to thank the Prime Minister for the appointments,” he said when contacted.

Meanwhile, there was a hive of activity at Umno’s headquarters at the Kuala Lumpur World Trade Centre (WTCKL) as its highly anticipated supreme council meeting was expected to decide on whether or not it stays with the Perikatan government.

However, as at press time, the meeting was still going on.