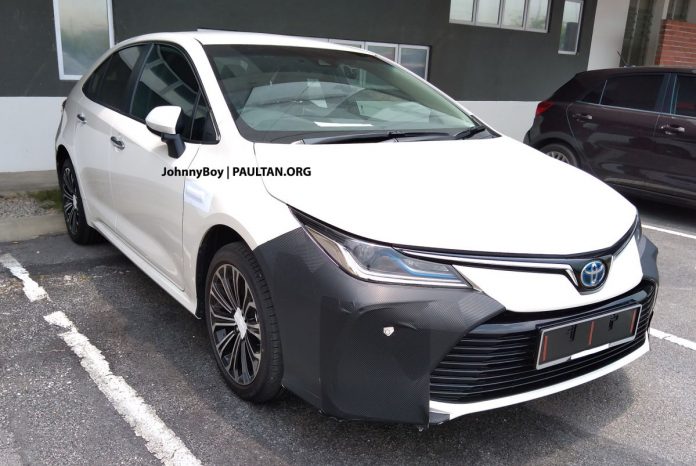 Earlier today, UMW Toyota Motor (UMWT) announced that it will in the future start local production of hybrid vehicles. The company says that it will invest RM270 million into expanding its current manufacturing operations and facilities. This amount includes, amongst others, the introduction of a “new and technologically-advanced generation of HEVs”.

“We are ready (with the introduction of HEVs), and the technology, service support, current infrastructure, global and domestic policies, the level of affordability and cost effectiveness, and consumer awareness and demand, particularly in Malaysia, are now at its most ideal conditions to pursue a new and exciting journey towards achieving carbon neutrality,” said UMWT deputy chairman Akio Takeyama.

For Malaysian car buyers, the local manufacturing of Toyota HEVs “would translate into advancing into a new era of motoring, one that gives them access to the latest and most innovative technologies, at a price point that is practical and accessible to the greater masses,” UMWT says. UMWT did not elaborate or hint at the upcoming CKD hybrid models. The brand’s previous, and only, locally assembled hybrid effort so far was the previous generation Camry Hybrid, which was launched in 2015 along with the XV50 Camry facelift range. With tax incentives, the range-topping hybrid D-segment sedan had a launch price of RM174,900 six years ago.

What could be on the cards this time around? We have a sleek new generation Camry now, and the XV70 also has a hybrid variant. The latest Camry Hybrid facelift could be one of the potential models, even if Japanese brand D-segment sedans – once a permanent fixture on our roads – aren’t as popular now as they were when the previous car surfaced. This is due to a combination of rising prices, increasing affordability of entry premium brand models, and of course – the relentless assault by SUVs.

Speaking of SUVs, even the Corolla has an SUV variant now. Launched in March, the Corolla Cross started life here as a CBU import, but CKD production will start in the second half of the year, which we just entered. The Corolla Cross will be first TNGA-based car to be assembled in Malaysia.

We get the crossover in 1.8L NA form now, but the Corolla Cross is also available as a hybrid elsewhere. The Corolla Cross Hybrid pairs a 98 PS/142 Nm 1.8L NA engine with a 72 PS/163 Nm electric motor and Ni-MH battery for a total system output of 122 PS. In Thailand, this hybrid powerplant is an option for both C.Cross and C-HR SUVs.

Also using this tried and tested hybrid system is platform-mate Corolla. Like the Cross, the C-segment sedan is currently sold in Malaysia in CBU form, with a 1.8L NA engine. The Corolla Hybrid was actually spotted in Malaysia in late-2019 being tested by UMWT – click on the pics above for a closer look.

UMWT’s Takeyama says that the company is ready to roll out hybrids now, and that consumer awareness and demand is ideal in Malaysia for them to do so. Let’s talk about the latter part of that statement, the part that describes us Malaysian consumers. The awareness is definitely there – it all happened in that small window from 2011-2013, where imported hybrids were given tax breaks. Honda and Toyota moved fast and were main beneficiaries of the Najib-era policy. CBU Japan models like the third-gen Toyota Prius, Toyota Prius c, Lexus CT 200h, Honda Insight and Honda CR-Z were relatively affordable, and popular among urban folk.

The next step was to encourage local production of hybrids, and Honda took the lead with the CKD Jazz Hybrid – in fact, the company’s Melaka plant is still rolling out hybrids to this day. Toyota’s attempt at CKD hybrids was limited to the XV50 Camry Hybrid.

As for the demand part, it’s not so straightforward, isn’t it? Let’s face it, Malaysians bought hybrids because they were “cheap” and not because of the eco-friendliness of the battery-assisted cars. Petrol prices are subsidised and that somewhat nullifies the fuel economy benefits of hybrids. In any case, regular ICE engines have also closed the FC gap with better efficiency and/or downsizing/turbocharging.

Hybrid cars are also perceived to be more complicated, in a negative way. Carmakers offer specific and long warranties for the hybrid battery and hardware to counter fear, but it seems that the sentiment persists. Personally, I’ve owned a hybrid for over seven years without any electronic problems, but there may be some who weren’t so lucky. Japanese carmakers might point fingers German premium makes for this bad rep, but the average consumer might not be so discerning.

Would you go for a hybrid if its price wasn’t aided by tax incentives?