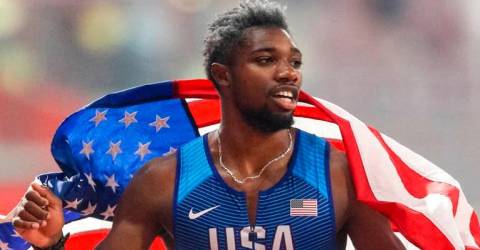 MONACO: American sprint star Noah Lyles (pix) will bid to put his aggravated psychological problems to one side as he heads a stellar line-up of athletes when competitive track and field resumes in Monaco on Friday in a season almost wiped out by the coronavirus pandemic.

Following exhibition events in Oslo and Zurich in June and July, the Diamond League meeting in Monaco will mark the start of the competitive season. Meetings in Eugene, London, Paris, Rabat, Gateshead and Shanghai have all cancelled because of coronavirus.

Lyles, who won the world 200 metres and the 4x100m relay in Doha last year, has admitted to psychological problems worsened by the COVID-19 outbreak, the Black Lives Matter movement and the postponement of the Tokyo Olympics at which he was hotly tipped for success.

“It’s a kind of perfect storm,” Lyles said of those triple concerns.

And the 23-year-old warned that he was targeting another fast race.

“I told my coach after the virtual Zurich Diamond League that I really wanted to run a fast time in Monaco,” said Lyles, who will be racing his brother Josephus – making just his third Diamond League appearance – and 2017 world champion Ramil Guliyev of Turkey.

“I know it’s going to be a really good track, I know it’s probably going to be wind legal. I want to do everything in my power to make sure that this race is really fast.”

While admitting to being on anti-depressants, Lyles said his experience during lockdown had not been all negative.

“We probably stayed in our house for about three weeks. There wasn’t a lot of time where I wasn’t training or going out,” he said.

“We lost our track for about six weeks, so we trained in a park. Even though we weren’t travelling and racing, we were still practising.

“When our gym reopened, we still didn’t want to go and expose ourselves to more people than we need to. As of my shape, it’s pretty good. I’m just going to say that, I’m in really good shape.”

Lyles aside, 10 other reigning world champions will compete at the Stade Louis II in the first elite athletics meet of the season.

There will be a reduced capacity of 5,000 spectators, while athletes have had to undergo COVID-19 tests before departure and on arrival to show they are not infected.

Sifan Hassan will be up against strong Kenyan duo Beatrice Chepkoech and Hellen Obiri in the women’s 5,000m. Obiri won the world title at that distance last season while Hassan – a member of the now-disbanded Nike-backed group of disgraced coach Alberto Salazar – took the 1,500m and 10,000m double.

“For me, Monaco is the most special meet to come to because it’s the only thing that we get this year that is normal. That is what I want and I think that it’s also what the spectators want,” he said.

World champion Timothy Cheruiyot of Kenya reprises his duel with Norway’s Ingebrigtsen brothers, Filip and Jakob, in the men’s 1500m, while Uganda’s Joshua Cheptegei, the world 10,000m champion, is targeting a world record in the 5000m on Friday.

“I honestly really missed competing. It’s something I love doing, it’s in my blood,” said Cheptegei.

“The next challenge is to go chase one or two more world records.” – AFP