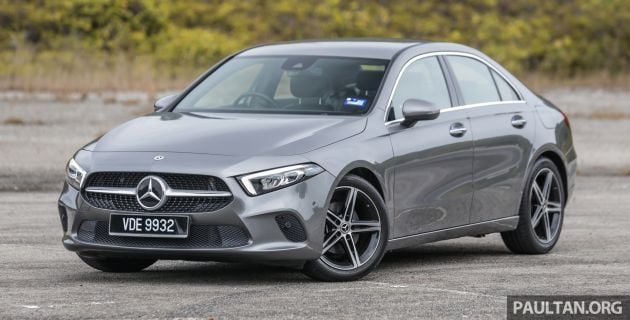 Earlier this year, Mercedes-Benz Malaysia (MBM) announced that it was aiming to expand its CKD footprint by confirming that it would be adding locally-assembled MFA compact car and SUV models to its lineup.

Despite there being no mention of what was in the pipeline at that point, it wasn’t hard to pin down likely candidates, with the V177 A-Class Sedan being top of that list, following the outline drawn from as early as 2018, when indicators had pointed to the model being the prime candidate when the CKD route for the MFA cars eventually came about. Other potential models include the five-door W177 hatchback as well as the H247 GLA.

In line with the move, local compact car production looks to have begun. A CKD production report by the Malaysian Automotive Association’s (MAA) for July provides the nod – in the document, which lists vehicle builds based on engine capacity for the month, it was revealed that 16 units of a model with an engine capacity of 1,301 cc to 1,500 cc were assembled by MBM at its Pekan plant that month.

However, don’t expect a market introduction just yet. Speaking to the media last month, Michael Jopp, MBM’s VP of sales and marketing, said that the lockdown had caused significant delays to timelines, and this included that of CKD production.

“While the plant was operating at limited capacity, travel and movement restrictions has meant it has been difficult for us to get engineers in, and they are required for many aspects, not just production. We are probably looking at two to three months delay from a launch perspective compared to our initial plans,” he said in reply to our question about how badly the compact car localisation programme had been delayed by the pandemic.

Apple judge weighs in on fight over Fortnite