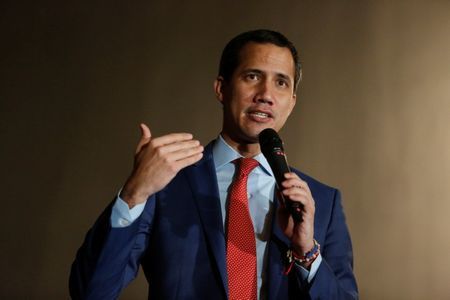 CARACAS (Reuters) – A committee of Venezuelan opposition politicians will travel to Washington and Brussels to seek support and consult its allies on their positions about an eventual lifting of sanctions, opposition leader Juan Guaido said on Friday.

Guaido told reporters that the committee traveling to the United States and Europe is the same group that has been meeting with officials from Norway in recent weeks in an attempt to establish a dialogue with President Nicolas Maduro’s government, which stands accused of vote-rigging and rights violations.

Guaido, who has proposed a “national salvation agreement” to help Venezuela emerge from a profound economic collapse and political crisis, last month said he would support a progressive lifting of sanctions on Maduro’s government on the condition that Maduro consent to “free and fair” presidential elections.

“We will discuss with our allies a framework under which they feel comfortable, for example, with that progressive lifting of sanctions based on (the government’s) compliance with an agreement,” Guaido said.

Venezuela’s information ministry did not immediately respond to a request for comment. Maduro, who calls Guaido a U.S. puppet and blames U.S. sanctions on the country’s oil industry for the once-prosperous OPEC nation’s economic woes, has said he is willing to sit down to dialogue with the opposition.

Oslo previously mediated a dialogue table between Venezuela’s government and the opposition in 2019, after the United States and dozens of other countries recognized Guaido – the speaker of the opposition-held National Assembly – as Venezuela’s rightful leader in a challenge to Maduro.

But Maduro has held onto power, backed by the South American country’s military.

Guaido said on Friday that Gerardo Blyde, who was an opposition negotiator in the 2019 dialogue, would lead the delegation to Europe and the United States. The delegation will be in Washington from June 21-25.