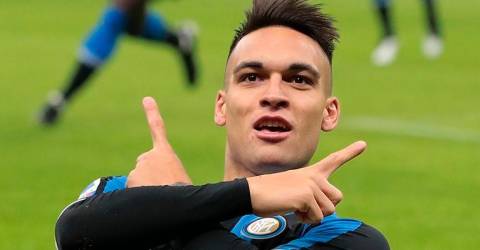 DUSSELDORF: Inter Milan thrashed Shakhtar 5-0 on Monday to reach the Europa League final, where they will face Sevilla on Friday.

The Italians, by far the better team, triumphed in Dusseldorf, barely conceding any chances and clinically dispatching theirs.

Antonio Conte’s rampant side took the lead through a Lautaro Martinez (pix) header, his 20th goal in all competitions this season.

Danilo D’Ambrosio nodded in the second goal from a corner after the break, with Martinez striking again and in-form Romelu Lukaku slotting home the fourth and nutmegging goalkeeper Andriy Pyatov for number five.

The first half started in dull fashion as neither team got hold of the game, but Nicolo Barella’s quality told in the 18th minute when he crossed perfectly for Martinez to head home.

Shakhtar goalkeeper Pyatov foolishly gave the ball away to the Italians and was instantly punished.

Three-time winners Inter nearly struck again as three players contrived to miss from point-blank range, with Ukrainian side Shakhtar living on the edge.

At the other end, Inter’s well organized defence gave short shrift to Shakhtar’s usually exciting attack, and the Italians continued to take no risks in the second half.

Pyatov made a fine save to tip away a Martinez lob, while Lukaku bent an effort narrowly wide of the far post on his weaker right foot.

Junior Moraes should have levelled just after the hour mark but he spurned Shakhtar’s best chance by heading straight at Samir Handanovic when well placed.

Lukaku came close again, looking to score in his 10th consecutive Europa League game, but Martinez netted the third with a perfectly placed curler from the edge of the box.

Eventually Belgian striker Lukaku got his goal, stroking home into the bottom corner with 12 minutes to go, continuing the run he started with Everton back in the 2014-15 campaign and extending his record.

The former Manchester United forward notched his 33rd goal in all competitions late on, speeding into the area and firing through the hapless Pyatov’s legs to put the cherry on the cake.

“It was an incredible night, something we have been dreaming of, we proved that Inter are ready for great things, we are ready for the final,” said Martinez.

“I’m very happy with my goals because I have had a difficult period with goals. But mostly I’m happy for the team, we are growing day after day, a perfect mix of experienced players and youngsters.

“Sevilla are a very good team but we will prepare well and try to recover from this game. We will give everything to give Inter this cup.”