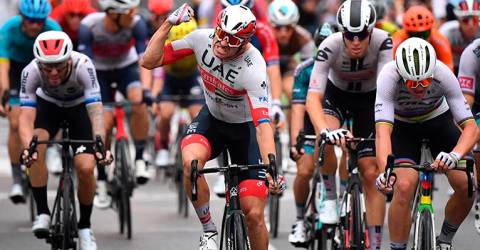 The Norwegian will now wear the overall race leader’s yellow jersey, having fought back from an early fall that looked like ruling him out.

The 2020 Tour set off two months later than planned due to the coronavirus and under strict health protocols.

However, the first rain in the Mediterranean city since June turned the opening jaunt of the 21-day race into a lottery.

Top riders, led by the Jumbo team, were shocked by the crash.

A truce was called that slowed down the race.

“That was great for me, allowed me to get right back in,” said 33-year-old Kristoff, who had been around six minutes adrift after his own tumble.

The heavy COVID-19 atmosphere weighing on the seaside city was lightened slightly at the start when French government minister Michel Blanquer sent out a rare message of hope the Tour would make it all the way to Paris in three weeks’ time.

“You can’t rule out the cancellation of the Tour, but it has been so well prepared that the possibilities of it happening are very slim,” he said.

Local newspaper Nice-Matin raised eyebrows on Saturday running a picture of the Dutch team Jumbo’s leader Primoz Roglic, one of the favourites, instead of a Frenchman.

But the key Frenchmen in the race both had days to forget.

After 14 days in the lead last year Alaphilippe was forced to fight back alone from two minutes down after a mechanical issue.

While luckless fan favourite Pinot was involved in the last of many falls as the peloton swept along the rain-sodden seafront walkway.

Sunday’s 186km stage also starts and ends in Nice but will be run under blue skies and over the Alps in the Nice back country. – AFP