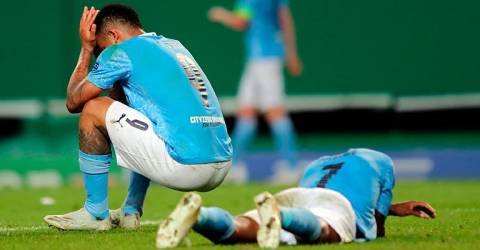 BERLIN: One year after an all-English final between Liverpool and Tottenham the Premier League is no longer represented in the Champions League as Manchester City went out in the quarterfinals.

A changed tactics by manager Pep Guardiola with three defenders did not realy work, and even though they changed back to a 4-3-3 formation in the second half individual mistakes cost them in a surprise 3-1 defeat against Olympique Lyon.

Liverpool, Tottenham and Chelsea all went out in the last 16 which left City as the lone representative at the mini tournament in Lisbon after they ousted record winners Real Madrid last week.

But City failed yet again to win the elite event for the first time, and Guardiola has not lifted the trophy since his Barcelona days in 2009 and 2011, failing to repeat the success with Bayern Munich and City.

“There is a lot of disappointment. We wanted to win the cup,” said playmaker Kevin de Bruyne who scored a temporary 1-1 equlizer.

“We didn’t play the way we wanted. The coach had a plan but we didn’t find the options and space. We changed in the second half and played better. We should have scored a second but then gifted them two goals.”

“If you play for a club like City we must win everything. We didn’t win enough and didn’t play well. We must do better next season.”

Their only title in the coronavirus-marred 2019-20 season is the League Cup as City finished far behind champions Liverpool in the Premier League, were ousted in the FA Cup semifinals and have not gone beyond the quarterfinals in the Champions League under Guardiola.

Guardiola defended his tactics as he also blamed mistakes for the exit against Lyon – who had beaten City and drawn with them last season in the group stage, and ousted Cristiano Ronaldo’s Juventus last week.

City, missing Sergio Aguero with injury, lost the ball in midfield which allowed Lyon to restore the lead at 2-1 in the 79th from Moussa Dembele, Raheem Sterling missed a sitter for 2-2 and right afterwards Dembele tapped in for the final score after a blunder from goalkeeper Ederson.

“We should have scored a second but gifted them two goals,” de Bruyne said, with Guardiola adding: “We created a lot but made one or two mistakes.”

There is only a short rest period now as the Premier League starts in mid-September and City will also return to the Champions League – after the Court of Arbitration recently nullified a two-year European ban imposed by UEFA for violating Financial Fair Play rules.

“The players must now take a break. Then we will be back, the next season will be so demanding,” Guardiola said. – dpa

Partygate: No easy return for Boris Johnson after Easter break