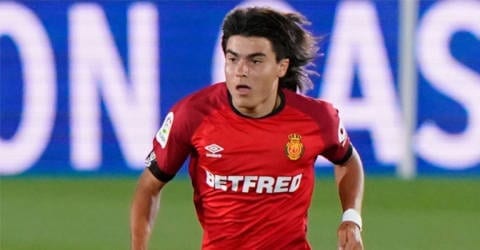 MADRID: Real Mallorca’s Luka Romero (pix) made history on Wednesday by becoming the youngest player ever to play in La Liga, aged 15 years and 219 days.

After training with Mallorca’s senior team for the first time on June 1, Romero, who plays as an attacking midfielder, came on as a substitute in the 83rd minute of his team’s 2-0 loss at Real Madrid.

“It was an unforgettable moment,” Romero wrote on Twitter after the game.

“”Thank you to everyone on the technical staff and at Real Mallorca for giving me this opportunity. I will never forget this day. It was a shame to lose but we keep “believing.”

Romero beat the record held for 81 years by Francisco Bao Rodriguez, known as ‘Sanson’, ‘who played on Dec 31, 1939 aged 15 and 255 days for Celta Vigo against Sevilla.

Mallorca coach Vicente Moreno was seen talking to Romero before he brought the youngster on as a substitute.

“I tried to just keep him calm,” Moreno said.

“I put my hand on his heart and I could tell it was beating very fast, which is normal for a kid of his age. He deserved to play and that’s the reason he came on.

“We don’t look at age. He has been training well and this seemed the best way to increase his motivation. His a great player and I think in the future he will give us a lot.”

Romero was born in Mexico and could also play for Spain but his family is Argentinian and he has already represented Argentina at under-15 level.

“My whole family is Argentinian and my dream is to wear the national team’s colours,” Romero told the Argentinian Football Association in 2018.

Romero also had trials with Barcelona but joined Mallorca in 2011.

He is left-footed and has been likened to Spanish midfielder David Silva by Mallorca’s assistant coach Dani Pendin.

After coming through the club’s youth teams, he was an unused substitute against Villarreal and Leganes before finally being given his chance against Madrid.

“He is left-footed, fast, clever, mischievous, competitive… the prototype of the Argentinian number 10,” Pendin said in an interview with Spanish sports daily AS last week.

“We have seen him develop since he was 12-years-old, but we did not want to build him up too fast because you have to take care of him.

“We saw him playing, he was doing incredible things in his age category, but physically he had not quite finished his growth and that could bring him problems if he came up against first division players too early.

“Today, when we see his feet, his body, we see that he is starting to form. And the fact that his father was a footballer also helps him a lot.”

Mallorca are fighting relegation in La Liga. They sit 18th, three points away from safety with seven games left to play. – AFP