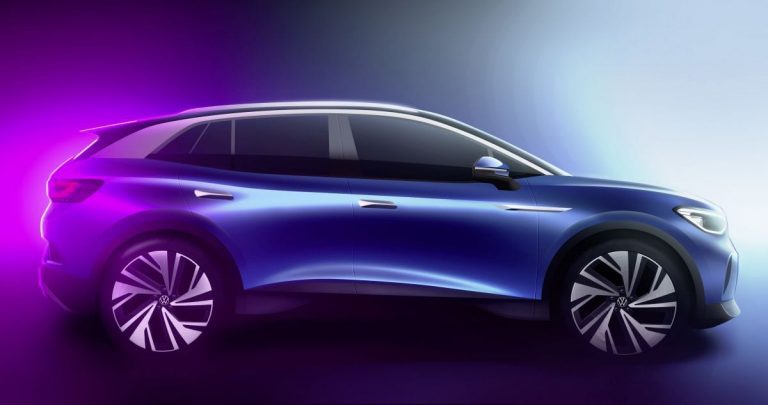 Volkswagen is set to officially unveil its ID.4 fully electric SUV next month, and the MEB-based model will be the second in the brand’s battery-powered line-up after the ID.3 hatchback that made its debut a year ago. The ID.4 SUV is expected to offer battery range of up to 500 km on the WLTP test cycle, and could be achieved thanks in part to a low drag coefficient of 0.28, said head of Volkswagen Design Klaus Zyciora.

“The ID.4 represents an electric design evolution. Its design appears strong and self-confident in a new way, mainly due to the seamless, aerodynamic style of our ID. family, which we have transferred to the SUV segment for the first time with the ID.4,” said Zyciora, adding that “the design looks as if shaped by the wind itself.”

The ID.4 will likely become available in a few variants like the ID.3 hatchback, and the largest battery pack capacity expected for the ID.4 is 83 kWh. The SUV will get a fast-charging setup that enables an 80% charge to be done in 30 minutes when a 125-150 kW system is used.

Real-life images of the ID.4 were disclosed in filings submitted to the government of China for type approval

The ID.4 is expected to launch with a single, rear mounted drive motor producing 204 PS and 310 Nm of torque, which are identical figures to those for the ID.3 hatchback when it was launched.

The ID.4 has been sighted fully undisguised on an internet forum, from images submitted for filings to China’s ministry of industry and information technology, which is a requirement of all carmakers in order to receive vehicle type approval in China. Documents have also confirmed that the ID.4 will be 4,592 mm long, 1,852 mm wide and 1,629 mm tall with a 2,765 mm wheelbase.

Production of the ID.4 electric SUV has started in Zwickau, Germany, while pre-production has also commenced in Anting, China; full series production will start at the Anting facility this October. United States manufacture of the ID.4 will also follow suit, with the Chattanooga, Tennessee plant to start in 2022.