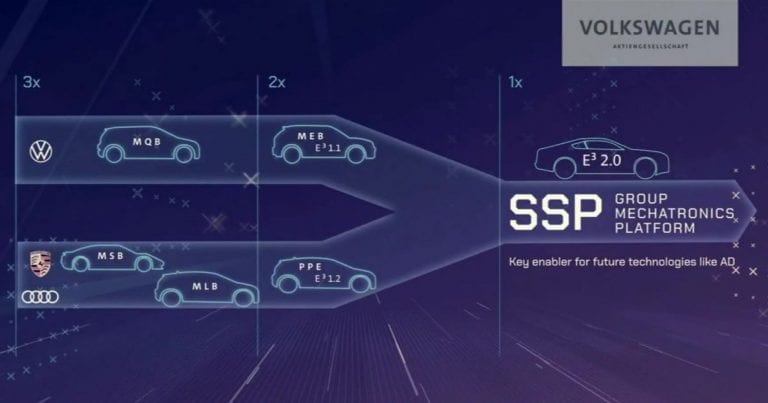 Volkswagen Group has presented its New Auto strategy, which consists of numerous initiatives that will lay the groundwork as the automaker transitions into becoming a leading provider of fully electric vehicles with autonomous driving and connected features.

The strategy, which runs through 2030, will be headlined by the new Scalable Systems Platform (SSP), which will be a unified architecture that underpins future models from every brand within the group. From Volkswagens to Porsches to Audis to Bentleys, all of them will use the SSP.

Modularity is an important aspect of the SSP, allowing the group’s brands to develop a variety of vehicle types to suit different requirements. Aside from predefined platform sizes, there are also several modules such as powertrain configurations, battery systems, autonomous driving systems and software platforms to mix and match with.

However, these modules will have a limited number of variants to keep in line with the company’s desire to reduce complexity. For instance, when it comes to battery systems, Volkswagen Group plans to reduce the number available from the current 22 to just eight. The company says that despite this, it can still offer great brand differentiation due to scalability.

Examples of SSP-based models that have already been announced include Audi’s Apollon SUV and Artemis sedan projects, with the latter being the first to showcase the architecture. Meanwhile, Volkswagen’s Trinity project sedan will also benefit from SSP, with more models likely to join the fray further down the road.

It will still take a while for these cars to hit the market, as the group plans to start production of EVs based on the SSP from 2026 onwards, and over the platform’s lifetime, the company is expecting more than 40 million vehicles to be built.

Like the current MEB, the SSP will be open to other automakers that want to adopt it for their vehicles, with the group investing around 800 million euros (around RM3.96 billion) into a new R&D facility in Wolfsburg to improve and speed up its mechatronics platform competencies. Aside from a new architecture, software will also play a vital role in the New Auto strategy, and the group’s CARIAD division will head development in this area. As of now, there are three software platforms that the software company is working on, starting with E³ 1.1 that allows for over-the-air updates of the MEB product portfolio, such as the ID.4, the Skoda Enyaq and the Cupra Born.

In 2023, CARIAD will release premium software platform E³ 1.2 that is based on Android Automotive OS and will feature in the electric Macan and Q6 e-tron. The giant leap forward is E³ 2.0 that will act as a unified operating system for vehicles from all group brands. It will not only integrate VW.OS (Volkswagen Operating System) and VW.AC (Volkswagen Automotive Cloud), but also enable Level 3 and Level 4 autonomous driving functions.

All software platforms offer various degrees of connected features and with vehicle-to-everything (V2X) communication, it gathered data can be analysed to ensure vehicles are kept to date with the latest features. The hardware to support all the computing is also deemed futureproof, so any updates can take full advantage of what’s already found in cars.

As for the batteries, the group is also planning to use a standardised battery cell format to help reduce costs by up 50%, with a rollout scheduled to start in 2023 through 2030. This will cover up to 80% of the worldwide Volkswagen EV volume.

Getting into the technical details, the group says it will use a prismatic cell format that can contain any chemistry depending on the target market. For instance, iron phosphate for entry-level vehicles, high manganese for the main volume segment and high nickel for premium and high-performance segments.

This cell format is also compatible with upcoming innovations such as a cell-to-pack or cell-to-car system, a dry coating process or a high silicon anode. The cell can also be adapted for solid-state technology in the future.

To secure battery supply, six gigafactories (Elon Musk loves that term) will be located in Europe with a total production capacity of 240 GWh by 2030. The first three locations include Skellefteå, Sweden, Salzgitter, Germany (in partnership with Gotion High-Tech) and Spain, with others set to be announced later on.

A closed loop approach to batteries will also be used, with second life batteries being reused for other application, or recycled to recuperate raw materials for use in production again. To support these EVs, Volkswagen Group will boost public charging infrastructure in Asia, Europe and America.

Last but not least, the advance systems that allow for autonomous driving functions will give birth to autonomous shuttle fleets that expand mobility and transport services. With its strategic partner Argo AI, Level 4 automated driving vehicles from the group will form the biggest neuronal network of vehicles on the streets worldwide, with pilot projects already up and running in several cities. Volkswagen Group’s focus on EVs will see it reduce its carbon footprint per car by 30% over its lifecycle (compared to 2018) by 2030, in line with the Paris Agreement. Within the same timeframe, it expects the share of EVs to rise to 50%, while in 2040, nearly 100% of all new group vehicles in major markets should be zero-emission. Beyond that, by 2050 at the latest, the group intends to operate completely climate-neutral.

With a shift away from the internal combustion engine (ICE) to EVs, the group expects the latter to see a declined market share by more than 20% over the next 10 years. In parallel, EVs are projected to grow rapidly and overtake ICEs as a leading technology, although the latter is still important to keep the money flowing to fuel the transformation plan.

As such, the group is bullish about its operating return on sales in 2025, increasing the original range of 7-8% to 8-9%. This will not only be a result of its new models, but also from increased software enables sales and the expanding mobility market, both of which it is involved in.