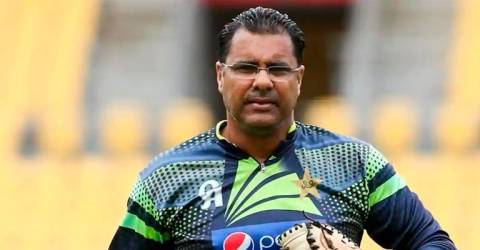 LONDON: Waqar Younis is confident that the future of Pakistan’s “trademark” fast bowling is in safe hands after overseeing the latest generation of quicks during their recent tour of England.

“Fast bowling is the trademark of Pakistan cricket,” said the 48-year-old Waqar, an outstanding fast bowler, in a Pakistan Cricket Board website column published on Thursday.

“There have been so many great ones over the years and I am confident that the future will be bright again,” added Waqar, who formed a celebrated partnership with left-arm quick Wasim Akram and is now Pakistan’s bowling coach.

“We have seen already that Naseem Shah and Shaheen Shah Afridi are wonderful bowlers. Muhammad Musa, who was part of the squad in England, is another, and there are a couple in the under-19s also. Of course, Mohammad Abbas is very seasoned and experienced.”

Abbas, like Waqar and Wasim before him, has played in English county cricket and the coach would like to see the emerging quicks do the same.

“I know from personal experience how much you can learn from playing in England, getting used to different weather and ground conditions, the pitches, and life off the field also,” Waqar said.

“Both Mohammad Amir (Essex) and Mohammad Abbas (Leicestershire) have been really successful for English counties and it has benefited their careers so much as well.”

One consequence of the coronavirus is that players have been banned from using saliva to shine the ball.

But Waqar said the Dukes ball used in England stayed harder for longer than other brands and “made the saliva issue less of a problem”.

Waqar, however, called on the International Cricket Council to designate just one brand of ball for all Test cricket.

“It doesn’t matter which brand but the ICC should make that decision,” he said. “It’s hard for bowlers to adjust to using different types of ball when they play around the world.” – AFP

Tennis: Tennis-Djokovic back in practice, family hails ‘biggest victory of his life’

Instagram is new frontier for central banks. Is TikTok next?