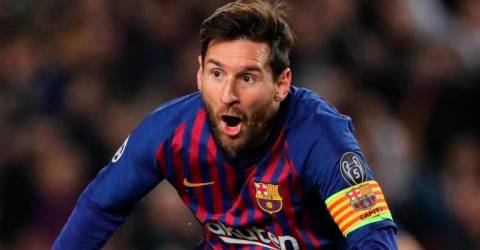 BARCELONA: When Lionel Messi met Ronald Koeman last Thursday and, according to well-informed Catalan radio RAC1, told his new Barcelona coach that he saw himself as more “out than in” at the club, the football world sensed the unthinkable could actually happen.

Despite major differences with the club’s president Josep Bartomeu, Messi had looked destined to see out his career at Barcelona.

But the historic defeat to Bayern Munich, 8-2 in the Champions League quarterfinals, has already provoked the sacking of coach Quique Setien and the departure of technical secretary Eric Abidal. Could Messi now leave too?

One of the first questions Barcelona supporters are asking themselves throughout what is turning into a propaganda war between club and player is: who is leaking what?

Bartomeu cannot afford to be seen as the villain and Messi the victim.

Messi, in turn, wants the pressure to remain on Bartomeu, who has so far resisted all calls for him to stand down.

Messi’s gripes are well documented. He blames the current board for the sale of his friend Neymar to Paris Saint-Germain; the failure to rebuild a decent team with the funds, and poor choices of coaches and sporting directors among other errors.

When Esporte Interativo reported last Sunday that Messi had told the Barcelona board he wants to leave, it was noticeable that no denial was forthcoming from the player.

If that news appeared to emanate from “camp Messi” then it seemed the leaking of the contents of the first Messi-Koeman summit may well have come from the club.

It has even been suggested by some commentators in Catalonia that Bartomeu and his board would be happy for Messi to leave as long as they are portrayed as helpless to have stopped it.

There is a huge hole in the finances. The Covid-19 crisis has forced games behind closed doors and shut down the football tourism industry on which Barcelona depends.

Getting Messi off the wage bill and bringing in a transfer fee for him, would certainly help fix things financially.

But it cannot be seen to be their idea. El Mundo Deportivo’s front page on Saturday declared Messi as “not transferable” and that has to be the public position.

Likewise Messi cannot demand to leave. That would change the dynamic and suddenly he would be the bad guy.

So far it seems his message amounts to him considering his future and not being willing to sign a new contract.

There is no imminent end to the crisis in sight before the return of Barcelona players to training at the end of August.

PSG, Inter Milan and Manchester City are all feasible potential suitors but none of them are prepared to move while the player has a year left on his contract and is protected by a release clause of €700 million (RM3.45 billion).

In January he will be free to negotiate a free transfer but by then Bartomeu will be into his last three months as president. He stands down in March ahead of elections.

Messi will be close to seeing off the president and therefore would be less likely to go.

An uncomfortable marriage of convenience may be the only outcome to the current stand-off. – dpa