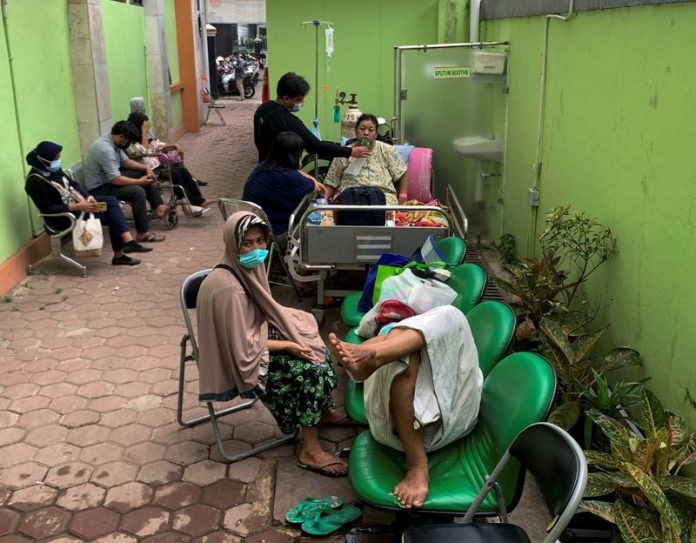 JAKARTA (Reuters) – Indonesian doctor Cheras Sjarfi says the small public hospital where she works in south Jakarta was not ready for the influx of COVID-19 patients who arrived after a surge of new infections in the world’s fourth-most-populous country.

Only equipped for basic health care, her facility has had to treat COVID-19 patients even though it lacks the life-saving ventilators and intensive care units they sometimes require.

“We weren’t prepared for this situation,” she said, adding that the situation at smaller hospitals like hers showed how severe things had become.

The 28-year-old general practitioner said she knew it was getting bad when all the patients classified as suspected coronavirus cases tested positive within a week.

Grappling with the worst outbreak in Southeast Asia, Indonesia has reported record daily cases in seven of the past 11 days, including on Thursday, with 24,836 new infections and 504 deaths, both new highs.

The spike has made it harder to transfer severely ill patients, and city hospitals were at 93% capacity this week. Hospitals across Java are also nearly full.

“We… receive the incoming patients as best as we can. Give them oxygen, check their blood pressure, and observe them,” she said, adding that if a patient’s condition worsens it is unlikely that other hospitals can take them.

“The worst case is they die here. I definitely feel sad even if I have seen… people dying many times,” said Cheras.

She is working 12-hour shifts, double the normal length, after she said some of her colleagues were infected despite being fully vaccinated.

Still, despite the huge strain and concerns she could be re-infected with COVID-19, Cheras tries to remains positive.

“Although we are exhausted and wonder when will this end… I think it still manageable,” she said.