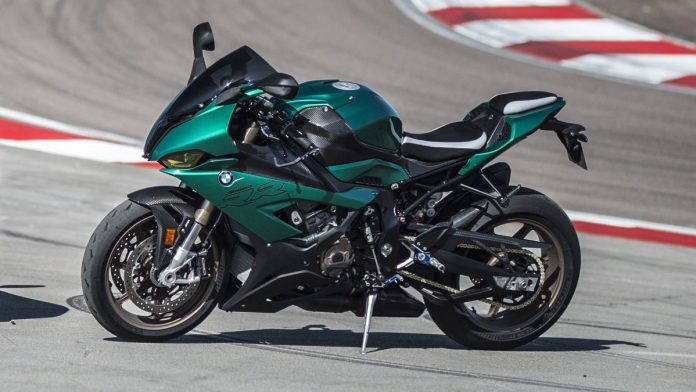 While the fabled Isle of Man (IoM) TT is not being held this year due to the pandemic, BMW Motorrad France has released a 50 unit limited edition S1000RR commemorating the race. Dubbed the BMW Motorrad S1000RR Isle of Man Edition, pricing as listed is 33,005 euros (RM162,465) and will be sold only in France.

First seen on the 2020 G80 BMW M3 Competition, the S1000RR IoM Edition is clad in M Isle Of Man Green and comes with a host of complementary BMW M touches. This includes the BMW Motorrad M forged wheels painted copper, mimicking the gold of the M Carbon Ceramic brake calipers.

Also standard is the S1000RR Carbon Pack option and carbon-fibre tank trim, reminiscent of the roof of the M3 Sedan made from the same material. The S1000RR model name is inscribed in black, similar to the M3 Competition logo found at the rear of the M3 Sedan.

The rider and pillion seats on the S1000RR IoM Edition is covered in black Alcantra leather with twin grey bands on the sides, making reference to the Merino Silverstone upholstery of the M3 Sedan. Further differentiating this France-only version of the S1000RR, the Led headlights shine yellow, something only allowed in France.

Planeload of fleeing Afghans arrive in Mexico, including journalists

Explainer-Apple gives ‘reader’ apps a way around commissions. Who wins?

More must be done to protect women