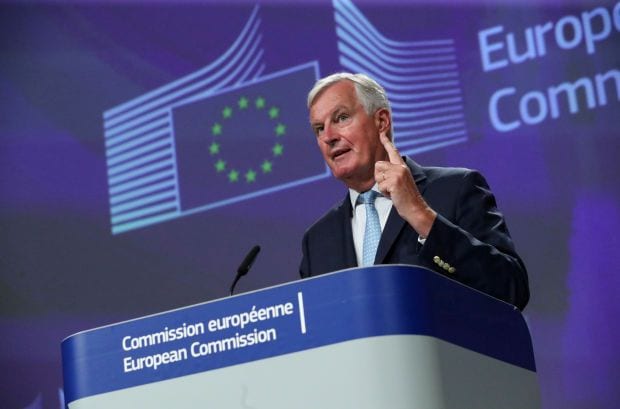 LONDON: Britain called on the European Union to be more pragmatic and Brussels urged London to help rebuild trust on Sunday, as the sides prepared for talks this week on a part of the Brexit deal that governs trade with Northern Ireland.

Since it completed its departure from the EU last year, Britain’s relations with the 27-member bloc have soured, with both sides accusing the other of acting in bad faith over what is called the Northern Ireland protocol.

The protocol introduced checks on some goods moving from mainland Britain to Northern Ireland, a British province which has a land border with EU member Ireland.

The checks have caused a perception among pro-British unionists in Northern Ireland that the Brexit deal divides them from the rest of the United Kingdom, a shift they say could sink a 1998 peace deal that ended three decades of violence.

“We ultimately need to re-establish a minimum level of trust that allows us to find solutions,” Joao Vale de Almeida, the EU ambassador to Britain, told Times Radio before talks between EU and British officials that are expected to resume on Wednesday.

He added: “I remain confident that we can get there.”

The envoy said no viable alternative to the Northern Ireland protocol, a measure designed to prevent a “hard” border between the EU and Britain on the island of Ireland, had been proposed. He called on Britain to honour its agreements.

In comments published by the Financial Times, Frost said the EU needed to show more pragmatism and less “legal purism”.

“We continue to work for negotiated solutions which achieve this. But time is starting to run out. We need to see progress soon. I hope we can this week,” Frost said.

Britain had made huge compromises to make the agreement work, he added.

“This is simply not the case… Is this about media messaging in UK or really solving problems together?,” he said on Twitter.

Preserving the delicate peace without allowing the United Kingdom a back door into the EU’s single market via the Irish border was one of the most difficult issues of nearly four years of talks on the terms of Britain’s exit from the bloc.

Some politicians fear the dispute could spill over into violent protest in Northern Ireland.

I’m so, so sorry, sobs Azizul