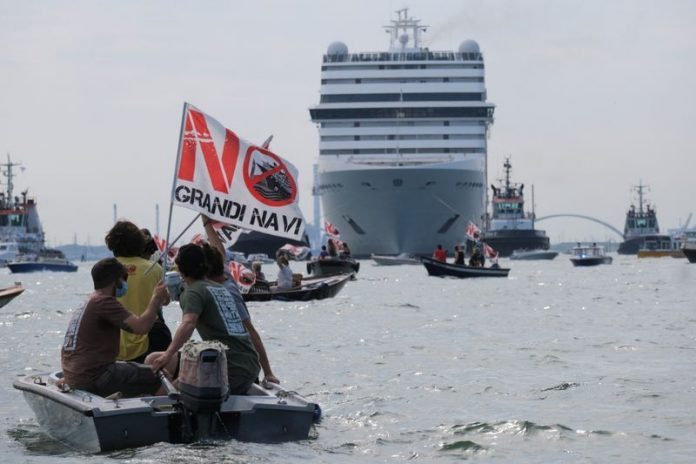 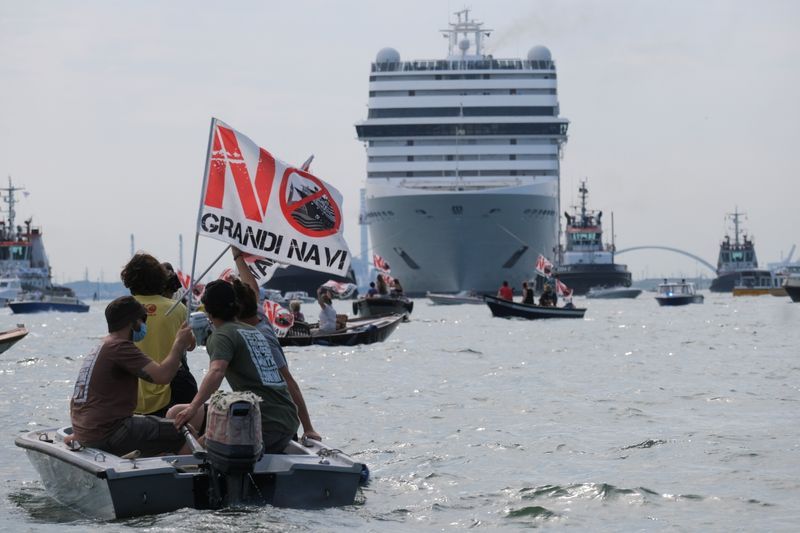 VENICE (Reuters) – The first cruise ship to leave Venice since coronavirus restrictions were eased set sail on Saturday, but some local residents protested over the return to normal, unhappy about the passage of giant liners through the historic lagoon city.

Hundreds of people rallied on land and small boats fluttering flags saying “No big ships” surrounded and followed the 92,000-tonne MSC Orchestra as it departed Venice port en route for Croatia and Greece.

“We are here because we are against this passage but also against a model of tourism that is destroying the city, pushing out residents, destroying the planet, the cities, and polluting,” said Marta Sottoriva, a 29-year old teacher and Venice resident.

But port authorities, workers and the city government welcomed the departure of the Orchestra, operated by MSC Cruises, seeing it as a symbol of business kicking off after the health crisis that hit hard at the cruise industry and the wider travel sector.

“We are happy to be back… to restart the engines. We care a lot about Venice and we’ve been asking for a stable and manageable solution for ships for many years,” said Francesco Galietti, national director for the trade group Cruise Lines International Association (CLIA).

Some residents have been urging governments for years to ban large cruise ships and other big vessels from passing through the lagoon and docking not far from the famed St. Mark’s Square.

Campaigners worry about safety and the environment, including pollution and underwater erosion in a city already in peril from rising sea waters.

“The struggle is very long, I think we are against very big financial interests,” Marco Baravalle, a 42-year old researcher, and member of the No Grandi Navi (No big ships) group.

He and other protesters were worried that “everything will go back to what we had before the pandemic”, he added.

Italy’s government ruled in April that cruise ships and container vessels must not enter Venice’s historic centre but rather dock elsewhere.

But the ban will not take effect until terminals outside the lagoon have been completed, and a tender for their construction has not been launched yet. Part of the traffic might be diverted to the nearby port of Marghera starting from next year.

WHERE JOURNEYS BEGIN OR END

The Orchestra was escorted outside the port not just by small vessels protesting but by tugboats that saluted it with water sprays, a sea tradition reserved for special occasions.

The 16-deck ship can carry over 3,000 passengers and 1,000 crew but for this voyage will be sailing at only half capacity due to COVID-19 social distancing rules.

“It’s an important day for us, for 4,000 workers and many others who work in this sector. We are starting again after over 17 months, finally there is light at the end of the tunnel,” said Alessandro Santi, chairman of the Federlogistica business group.

He said the port community favoured the bans but alternatives had to be found given the importance of tourism for the city.

The CLIA estimates that the cruise business represents more than 3% of Venice’s GDP.

“Venice is where many itineraries begin or end, the economic impact on Venice is huge,” said Galietti. “If Venice is taken off the itineraries all the Adriatic (Sea) will suffer the consequences … it would be a huge impact.”