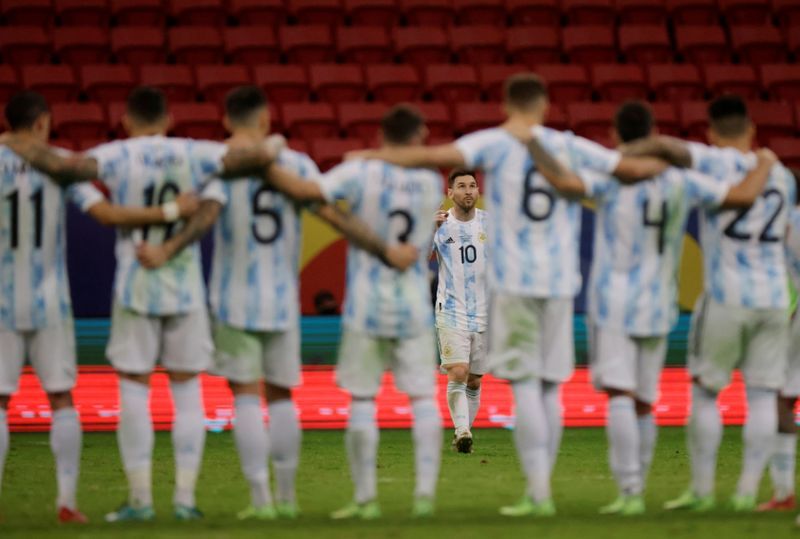 RIO DE JANEIRO (Reuters) – Europe might be waiting for England against Italy in Sunday’s Euro 2020 showpiece but there is an even bigger match to look forward to in South America as an older rivalry between two more successful teams kicks off in Saturday’s Copa America final.

Brazil against Argentina is a true clasico. The teams first met in 1914 and in the years since have established themselves as two of the most storied sides in world soccer. Together they have won seven World Cups.

The two teams have been head and shoulders above their rivals in this year’s Copa America and in Neymar and Lionel Messi have the tournament’s two standout performers.

Argentina are unbeaten in 19 games going into the showdown at the Maracana stadium, while Brazil, the hosts and reigning champions, have not lost since Argentina beat them in a November 2019 friendly.

“Whether we like it or not they have the best player in the world (Messi),” said Brazil forward Richarlison.

This year’s final is especially interesting because of the timing, in terms of organisation and personnel.

That annoyed Argentina, who were counting on home advantage after Brazil hosted the last tournament two years ago – when they beat Argentina 2-0 in a semi-final in which controversial refereeing decisions fell in favour of the host nation.

It is also another tournament where Argentina – and more notably Messi – are seeking to end a long trophy drought. They have not won a major title since lifting the Copa America in 1993 and Messi has never won silverware with the national side.

Brazil are narrow favourites and not just because they are at home and have a slightly better record so far in the tournament. They also have a reputation for beating Argentina in crunch games.

Brazil won in 2004 in the Copa America final in Peru and again in Venezuela in 2007, when they overran a fancied side that contained a young Messi in his first international final.

The headlines before Saturday’s clash will speak of Messi’s search for a first title but the same is true for Neymar.

The Brazilian won the Confederations Cup in 2013 and, like Messi, he has an Olympic gold medal. But he missed the 2019 Copa America triumph through injury.

He does at least have a superb record at the Maracana.

“Films go through my head of all the glories and happy days I’ve had there,” said the Paris St Germain forward. “I’ve never lost there, and I hope that doesn’t change.”