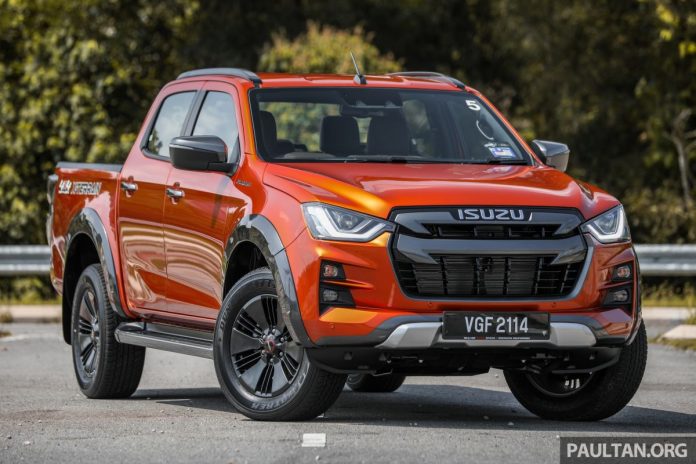 The arrival of the third-generation Isuzu D-Max in the Malaysian market has brought a significant uptick in sales compared to its predecessor, which is in line with global sales trends for the pick-up truck, says Isuzu.

The third-generation D-Max has seen an average of 1,200 bookings every month in Malaysia since its local debut in April this year, which is more than double the average monthly bookings of 500 units achieved by the second-generation model. This reflects similar trends seen in markets such as Australia, New Zealand and Thailand, according to the company.

Topping the popularity chart among the D-Max variants is the 1.9 litre Premium automatic, which accounted for close to 36% of D-Max purchases. The relatively small displacement diesel engine was also credited with the model’s popularity in Peninsular Malaysia, accounting for 61% of overall sales across the country and reversing the traditional 60:40 sales proportion that has historically seen an East Malaysia majority.

“The response to this new model has been extremely positive considering the limited opportunities our prospects have had to fully experience the new model, due to the strict movement controls and safety protocols. Our current aim is to ensure the smooth, safe and timely delivery of vehicles to our customers despite the various administrative and logistical concerns faced domestically and globally,” said Isuzu Malaysia COO Masayuki Suzuki.

The aforementioned 1.9 litre diesel is the existing RZ4E-TC common-rail injection engine that has been refined and offers improved throttle response, with outputs unchanged at 150 PS and 450 Nm of torque.

Recipient of even more upgrades is its 4JJ3 3.0 litre turbodiesel sibling, now fitted with a new engine head and turbocharger with the resulting outputs of 190 PS and 450 Nm of torque, or 13 PS and 70 Nm more than those from the previous 4JJ1 powerplant which was also of a 3.0 litre displacement.

For the third generation, the Isuzu D-Max is now built on the Dynamic Drive Platform iteration of the body-on-frame construction that is typical of pick-up trucks, offering improved rigidity, crash protection, driving stability and reduced NVH levels. The engine intake assembly has been raised, enabling an increased wading depth from 600 mm to 800 mm.

Further improvements include a 30 mm gain in wheelbase, rear doors that now open wider, 20 mm more shoulder room for rear occupants, larger brakes and revised suspension geometry. For off-roading, its underbody now comes with a 1.5 mm-thick steel skid plate, with an additional 6 mm steel sump guard for the engine and gearbox. Ground clearance is 240 mm when fitted with 18-inch wheels.